All Super Mario Games Releasing This 2021

While 2020 may have been the 35th anniversary of Mario, each year is his year for Nintendo, and 2021 doesn’t appear to be an exception. The global coronavirus pandemic has caused several troubles in the possible celebrations, but the anniversary of Mario still managed to pull off a much-needed success.

From new ports of classic games such as Mario 3D All-Stars to new innovative toys featuring every gamer’s favorite plumber, such as Mario Kart Home Circuit and LEGO Super Mario, 2020 was full of new methods to play as Mario. It will definitely hard for the new year to carry a similar kind of hype as the 35th anniversary of Mario, but 2021 should still offer several impressive Super Mario games.

As always, Nintendo has kept its mouth shut in terms of future releases, so there isn’t much known about the upcoming games of 2021 or even their release schedules. However, players already know when they can secure a copy of the next Super Mario game. 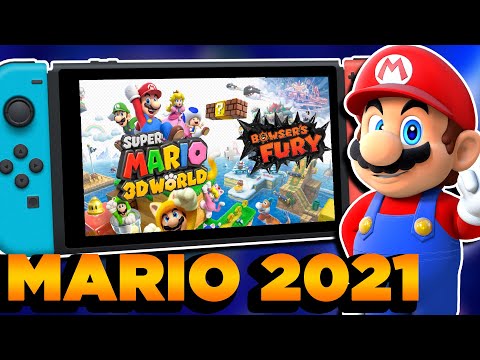 The game is set to arrive on February 12 along with a new DLC expansion, Bowser’s Fury. It is also worth mentioning that, unlike its Wii U version, 3D World will have an online multiplayer mode on the Nintendo Switch.

So far, Super Mario 3D World Deluxe is the only Super Mario game officially confirmed to release this year, but there are others that have been speculated to launch this year as well. According to a leaker, a new Mario sports-oriented title is currently being developed by Camelot, which has a history of making Mario sports-oriented games such as the recently released Mario Tennis Aces.

Even if the leak is true, it is still not known what sport the new game will cover, although, many fans believe that it’s high time for a Super Mario Golf title. This speculated Mario sports title is said to be set for launch during the first half of this year, so fans should soon learn if this leak is true.

Alongside the 35th anniversary of Super Mario, last year was also marked with controversy for the Japanese gaming giant, much of it regarding Mario 3D All-Stars. While players were hyped to play a few of their favorite Mario games from the past, players were frustrated will the game’s restricted availability.

Mario 3D All-Stars will only be available for purchase until March 31, 2020, and what comes after this date has left players wondering. Considering Nintendo’s recent history of trying to milk ports for all their money’s worth, it shouldn’t even be shocking to see Mario Galaxy, Mario Sunshine, and Mario 64 all launched as solo games after March 31.

Build Your Ideal Egyptian Empire in Pharaoh: A New Era