A recent video from Animal Crossing: New Horizons showed off some of the new stuff coming to the game this month, including a Super Mario-themed crossover, St. Patrick’s Day content, and more. As part of the series’ 35th-anniversary celebration, Nintendo introduced a slew of Super Mario-themed content to Animal Crossing at the beginning of March. Furniture, costumes, and objects from the Super Mario games, such as query blocks, character costumes, 1-up mushrooms, and working warp pipes, are among the new additions.

Although several of the seasonal items in Animal Crossing: New Horizons are only accessible for a limited time, the Super Mario-themed items in Animal Crossing would be available permanently. Players would have sufficient time to gather all of them at their own pace as a result of this. Since March signals the start of the game’s Spring season in the Northern Hemisphere, certain items that were previously only accessible during the season would become available once more.

Nintendo also posted a new video highlighting some of the game’s new features that will be released this month. Although Super Mario-themed items have already been introduced to Animal Crossing, the video serves as a reminder of Mario Day, which takes place on March 10.

Following Mario Day, players will be able to buy St. Patrick’s Day-themed products from March 10 to 17, 2021, in order to commemorate the occasion. Clothing and food pieces, as well as furniture and décor, are among the themed items.

The video also showed off some of the newest critters coming to the game, including tadpoles, orchid mantises, and spider crabs. Bamboo trees will be included in the game for Northern Hemisphere players for this month. 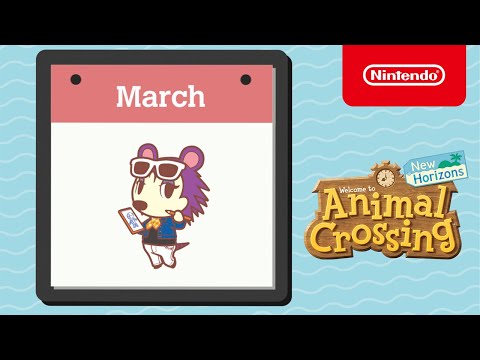 Bamboo parts may be harvested from the trees for DIY recipes, as well as Young Spring Bamboo for products that require it, but the latter is only available until May. Finally, during one of the game’s mystery tours, players can also come across bamboo trees.

Animal Crossing: New Horizons has been out for almost a year, and although the Super Mario and St. Patrick’s Day themes are also fun updates to the series, a special anniversary celebration and festival are expected to arrive in the game this month.

Nothing has been revealed yet, but if Nintendo does nothing to commemorate the one-year anniversary of one of the year’s most anticipated titles, that would be a massive lost opportunity. For the time being, players will be looking for answers by zooming across their Animal Crossing islands in those Super Mario pipes.

Undertale’s 5th Anniversary Concert Is Now Up On YouTube