Animal Crossing: New Horizons players can look forward to a lot of things before the year ends. To give fans a better idea about what they can expect for the months of November and December, Nintendo released a brand-new video on its official YouTube channel showcasing the new content and holiday events that fans can be excited about.

December is almost upon us, which means it’s almost Christmas. However, before snow covers the grounds of your New Horizons island, there’s one other event that you need to attend before decorating your house with holiday-themed items.

Namely, Animal Crossing: New Horizons players can look forward to Turkey Day this November 26, which is the game’s version of the real-world Thanksgiving, and Nintendo’s latest video gives us a quick preview of what we can expect from this event.

Believe it or not, November is a relatively relaxing and laidback month for many Animal Crossing: New Horizons players. There’s not a lot of events you need to keep in mind this month, while at the same time, you have the option to do some relaxing activities such as maple leaf collecting and mushroom harvesting. 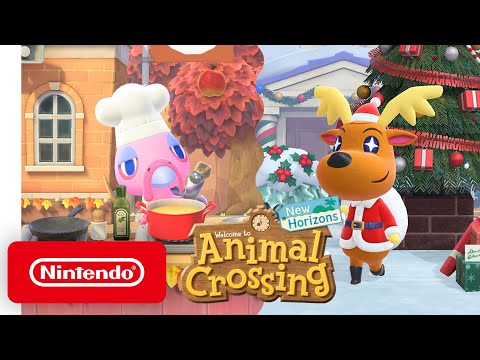 That being said, this kind of free and easy atmosphere may not be everyone’s cup of tea, as there are always those kinds of people who prefer having things to do. In that case, there’s no need to fret because New Horizons will be bustling with activities very soon.

Once November 26 comes around along with Turkey Day, players will want to prepare themselves for the arrival of Franklin.

The video that Nintendo posted focuses more on the Winter update, but the beginning parts highlight the upcoming Turkey Day celebration. For those who have played Animal Crossing: New Leaf on the 3DS, you might find that Turkey Day and the Harvest Festival are completely similar events.

Just like the Harvest Festival, you have to help out Franklin create a huge and delicious feast for all the villagers on your island. In the video, we can see the player offering two different kinds of pumpkins to Franklin as he starts cooking scrumptious meals for the event.

Pumpkin gardens were added to Animal Crossing: New Horizons in celebration of Halloween, but it seems that these food items are good for more than just creating spooky decorations.

If you worked hard to cultivate your pumpkin garden last month, then you should have a decent storage of pumpkins left over from the recent Halloween event. Besides pumpkins, Franklin will be requesting you to get other ingredients for his dish, including honeycombs, fish, and fruit.

Nintendo has recently announced the addition of two new NPCs in the world of Animal Crossing: New Horizons, with each representing a major holiday. As you may have guessed by now, Franklin is one of the two new NPCs.

Long-time Animal Crossing players will most likely already know Franklin from other games in the series, but new fans will finally get to meet this lovable character for the first time next week in New Horizons.