The Sigrblot Festival is coming to Assassin’s Creed Valhalla this week, on Thursday, July 29; players will be able to get their hands on a one-handed sword for the first time. Ubisoft Montréal will release Title Update 1.3.0 on July 27 to enable compatibility for Assassin’s Creed Valhalla’s second narrative extension, The Siege of Paris, before launching the new festival.

The Siege of Paris DLC, which is set to debut on Thursday, August 12 across all platforms, will see Eivor and his companions journey to war-torn Frankia and take part in a protracted siege in the walled city of Paris. 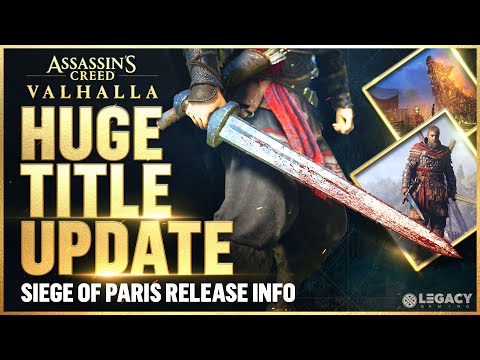 The new addition for AC Valhalla will arrive in the midst of yet another seasonal festival, an in-game live event similar to ones that have come before it. The first of these celebrations, Yule, launched in mid-December 2020; the Ostara Festival, which launched in mid-March.

It allowed players to explore an Easter-themed Ravensthorpe hamlet replete with egg hunts and seasonal decorations, launched a few months later. Ubisoft will release a third seasonal event in the coming days, one that will bring a much-desired weapon type.

Beginning July 29, AC Valhalla users may participate in a free update that welcomes in the Sigrblot Season, a limited-time summer-themed festival with new activities, awards, and objectives. Users will also receive 50 free Opals, which can be used to purchase things at Reda’s shop.

Sharpen your axe and prepare for war! The Sigrblot Season kicks off this week with a new time-limited festival, activities & more!

Even better, individuals who take part in the Sigrblot Season’s Test Your Metal activity will be able to swap festival tokens for the community-requested one-handed sword at Norvid’s shop. According to a post on the Ubisoft site, Test Your Metal will encourage players to join their Jomsviking in friendly combat competitions. Orlog matches and Fight or Flyte are two other events.

The arrival of the new event is sure to make some fans nervous. As many of you may know, the Ostara in-game event was plagued by game-breaking problems, forcing Ubisoft Montréal to postpone the celebration for a few days. Hopefully, the Sigrblot upgrade will not be as problematic as the previous one.

Even when The Siege of Paris goes online in August, this degree of post-launch assistance will be maintained. Ubisoft, for example, recently released Discovery Tour Viking Age. An allegedly “ambitious” second year of material is also in the works, though no details have been released.