Best and Strongest Black Commanders in Magic The Gathering

In Magic: The Gathering, black is perhaps the most diverse and multifaceted mono color. Black has a huge pool of possible commanders in the Commander format, thanks to its diverse tribes, mechanics, and strategies. When compared to some of its mono-colored rivals, Black haComparedand comes to potential deck possibilities, whether through graveyard-based decks, zombies, vampires, or Voltron.

So, today, we’ll speak about the finest that Black has to offer in terms of potential Commander decks.

Geth, Lord of the Vault

Now it’s time for a significant change of pace with Geth. Geth, Lord of the Vault, is a six-mana 5/5 with intimidating, which means it can’t be stopped by anything that isn’t Black or an Artifact, similar to fear but isn’t only for Black Creatures.

Aside from being a jerk, you can spend X and one Black mana to bring an Artifact or Creature from an opponent’s graveyard into play, and that player then mills X cards. It’s a great method to win a game because you have the option of stealing all of their best gear and beating them to death, or just milling them out. It’s a lot of fun in any case.

Erebos, God of the Dead

The flexibility of black as a hue is one of its greatest assets. Throughout Magic’s history, black has dabbled with many of the game’s varied mechanics, but if there’s one thing black has always had, it’s the ability to drain your opponent’s life steadily.

Erebos, God of Death, one of Theros’ founding gods, is one of the most open-ended gods, yet his talents greatly assist the god’s controller. To begin with, Erebos disables your opponent’s ability to acquire life. This implies that each life lost becomes increasingly important, and any life gained becomes much more valuable. Additionally, you can draw a card at any time by paying two mana and two life, preventing you from ever running out of options.

With Drana, Liberator of Malakir, a three-mana 2/3 with flying and first strike, it’s time to get back to being aggressive. That alone makes her a rather aggressive Legendary Creature, but it’s the ability that makes Drana stand out.

You receive a +1/+1 on every attacking Creature you control whenever Drana causes combat damage to a player. Because Drana has first strike, your Creatures will most likely be buffed before they ever enter combat, and this may easily spin out of control.

Toshiro Umezawa is a very unusual and underappreciated commander that can supply instants in your graveyard with flashback if a creature controlled by an opponent dies.

Because of their commander’s ability, a Toshiro Umezawa player may frequently receive double the value out of their kill spells by using them to take out a threatening monster and then casting the same spell again.

That’s entertaining enough, but the real kicker is that you can pay six mana to have each opponent lose ten lives if they don’t have any cards in their hand. This is a pretty unique approach, and it’s a lot of fun to play around with, given how effective Black is at having others discard cards.

Many commanders, like Anowon, The Ruin Sage, profit from generating an all-encompassing impact that severely hampers your opponents while being completely harmless to their controller. Anowon only has one ability: each player must sacrifice a non-vampire creature during each of your upkeeps.

While this ability can easily throw off many creature-light decks, and can even deal with resilient creatures with hexproof or indestructible, Anowon may lead a vampire-themed deck that will have little trouble dealing with it.

Mikaeus, the Unhallowed is another six-mana 5/5 with intimidating, but this time the special abilities don’t need any mana. Instead, all you have to do is send Mikaeus out, and you’ll reap the benefits of his presence.

To begin with, whenever a Human inflicts damage on you, you get to destroy it, which is convenient. The other ability, though, is the one you actually want, however, the other abilitytures +1/+1 and Undying, which means they may rise from the dead. It simply implies that all of your dangers are larger and more difficult to eliminate than before.

Chainer enables you to return any creature from your graveyard to the battlefield for three black mana and three life, making that creature a nightmare in addition to its normal kinds.

You’ll be able to generate massive threats through your graveyard because the ability is both inexpensive and recurring. Unfortunately, Chainer has a flaw that causes a player’s dreams to be exiled if Chainer departs the battlefield. Fortunately, there are ways to get around this limitation, like as using the card Conjurer’s Closet, which enables you to blink any of your creatures and remove their nightmare creature type.

While blue is typically linked with milling strategies, Syr Konrad the Grim is one of the most powerful milling commanders in the game, as well as being adaptable enough to be used with others and may deal a lot of damage over the course of the game by activating his ability whenever a creature dies, a card is put into a graveyard from a library, or even when a card leaves your graveyard. Syr Konrad works well with a variety of tactics, including simple removal, mill, and even recursion-based strategies, and may amass enormous amounts of damage seemingly out of nowhere.

In a game where players start with forty lives, one of the most commonly debated topics is whether or not Infect should be modified. An ability that causes damage to be dealt with via poison counters, effectively reducing a player’s life total to ten, tends to view Infect as a sort of boogeyman. In contrast, others view it as a cornerstone of agro. Skithiryx, the Blight Dragon, is the only legendary monster with infect in either case.

Skitrhiryx allows for highly aggressive decks to be built, with infect-focused tactics or voltron strategies bolstering Skithiryx’s own efficacy. Skithiryx is a five-mana creature that can regenerate itself as well as give itself haste with extra mana inputs.

Though rats aren’t frequently mentioned when discussing Magic’s most powerful tribes, Marrow-Gnawer proves to be one of mono-most Black’s powerful tribal commanders. Marrow-Gnawer has two talents that work in tandem with each other and with the rest of your rat-based approach.

Ghoulcaller Gisa, if there was a single commander that really embodied the notion of creating a zombie army, it would be her. Gholcaller Gisa, one of the most popular commanders for mono-black Zombie tribe, is a commander who is more concerned with the amount of zombies he controls than the quality.

Having the ability to sacrifice a creature and produce an equal number of 2/2 black zombie tokens as the sacrificed creature’s power. Because the zombie tokens enter the battlefield as 2/2s, this essentially doubles the amount of power that a single creature may provide. Gisa can construct a large army of zombies that truly pack a punch when combined with zombie lords, monsters who boost the power of each zombie you control.

Many people were anticipating the debut of Yawgmoth, Thran Physician, the long-time major adversary of Magic: The Gathering, and it’s safe to say that the card did not disappoint. Yawgmoth is a commander with a wide range of skills and a great degree of versatility who can lead a variety of strategies.

Yawgmoth can put -1/-1 counters on creatures, serve as a sacrifice outlet, and even proliferate, making him the ideal commander for a variety of strategies ranging from Aristocrats to mono-black control, and even infect! 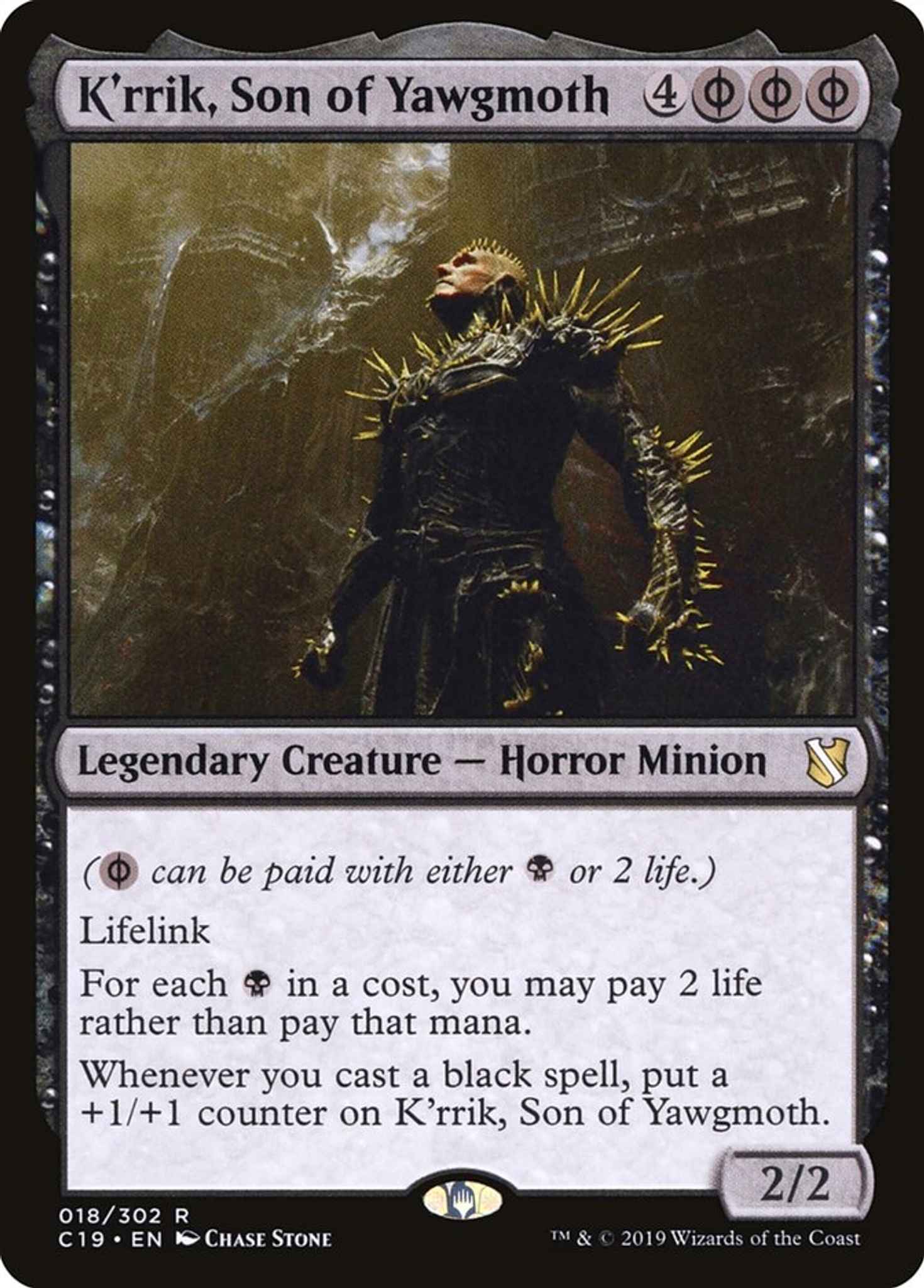 This enables highly powerful cards to be cast at significant discounts. As if this ability wasn’t already powerful enough, K’rrik gains +1/+1 counters over the course of a game and has lifelink, letting him regain the life you’ve lost due to spells.

Among Us Is 2020 Most Popular Game According to Google