Call of Duty: Modern Warfare is currently in its sixth season, and will soon be entering its sixth. A new trailer has been dropped to promote the upcoming Modern Warfare Season 6 which will feature new Operators and probably a new area in Warzone.

Scheduled to start on September 29, Season 6 will feature Modern Warfare’s campaign heroine Farah in front of the battlefield. A lot of Call of Duty fans have been asking Farah to be a Modern Warfare operator for online modes for quite some time now and seeing her join the ranks of selectable characters should prove to be a welcome addition. Nikolai, Captain Price’s hard-headed comrade, will also be added as a new operator for Season 6 when it launches later this month.

The trailer features Nikolai and Farah carefully reclaiming a subway station giving confirmation to a Warzone leak from last month. The leak suggested new subway stations on the Verdansk map via an overhead view of the Warzone battlefield which is now confirmed to be added to the next season of Modern Warfare. 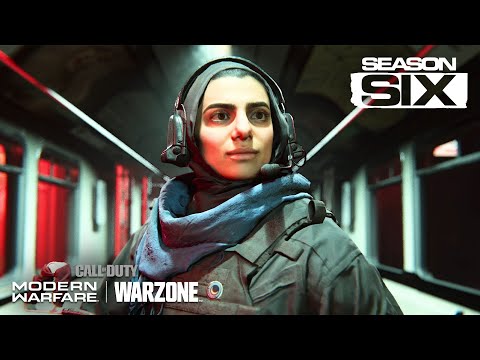 The subway shown in the trailer is a bit expansive, so it should perfectly fit Warzone’s gameplay for quite a bit. With the trailer’s description telling “take to the tunnels,’ the primary focus for Season 6 might be getting placed on this map addition.

Fans who were too focused on the map changes and the appearance of the new operators Nikolai and Farah would most probably did not notice the new weapon featured in the trailer. While it might not be the ACR and MP7 addition requested by most players, the AS Val assault rifle can be seen in the trailer as well as on Farah in the promotional photo for Season 6 at the end of the cinematic.

The trailer also included a monologue from Captain Price as well as other operators talking about the villain Imran Zakhaev. Zakhaev is the original villain for Call of Duty 4 as well as the antagonist for the ongoing Warzone and Spec Ops narrative so it is still uncertain when the heroes will kill him.

It may happen during the final cinematic at the end of the season or it could be during the sequel for Modern Warfare. It can also happen in one of the DLC Spec Ops missions too though this seems impossible since players are uninstalling the Spec Ops mode to help ease the storage space for the game’s massive updates.

With Season 6 just in the corner, now is the ideal time to get invested in Call of Duty: Modern Warfare. Players who want to avail the game should act now since the ongoing Activision/Blizzard sale includes a discounted Overwatch and Modern Warfare.

In related news, Moder Warfare’s playlist has been updated this week and will provide plenty of changes for players to enjoy including 3v3 sniper mode, Domination Deathmatch, and weekend-only Warzone mode. Additionally, updates will also be implemented to Shoot the Ship-tember playlist.

Amouranth Back On Twitch After Getting Banned For 3 Days