In Destroy All Humans! 2 – Reprobed, Crypto will be making a comeback. During THQ Nordic’s 10th anniversary webcast, the second game in the iconic series was revealed as a full remake for PlayStation 5, Xbox Series X/S, and PC. This verifies PlayStation’s Destroy All Humans! 2 leak, and the remake will transport Crypto to the west coast, England, Japan, Russia, and the moon ten years in the future.

During THQ Nordic’s digital display, Destroy All Humans! 2 – Reprobed was only one of six new games announced, with most of the others being vintage revivals from THQ’s history. Outcast 2 and Jagged Alliance 3 are brand-new remakes of long-forgotten sequels to cult classic games, following the publisher’s practice of bringing older, niche games back to life for current audiences. SpongeBob SquarePants: The Cosmic Shake, on the other hand, is a brand-new platforming adventure that follows the popularity of Battle for Bikini Bottom – Rehydrated. 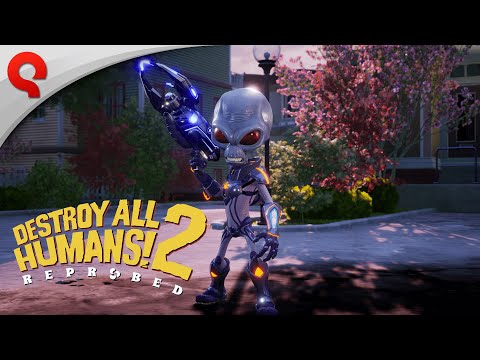 A pair of THQ Nordic trailers for Destroy All Humans 2! – Reprobed were unveiled at the publisher’s 10th Anniversary Showcase. The cinematic introduction showcases the franchise’s devil-may-care comedy. At the same time, a gameplay video demonstrates the visual enhancements planned for the new-gen experience, which will only be available on PS5, Xbox Series X/S, and PC at launch.

Reprobed’s mechanics, like the first Destroy All Humans! Remake, will strike the same beats as the original sequel, but the controls have been updated. The voice work from the previous game is also returning, ensuring that every moment in the game’s plot is faithfully recreated while receiving a fresh coat of paint.

THQ Nordic did not give a release date for Destroy All Humans! 2 – Reprobed, but it did confirm that the game would be released for the first time on PC. This is in addition to an initial console release that excludes the PS4 and Xbox One, as well as the Nintendo Switch.

If Destroy All Humans! 2 – Reprobed does well, THQ Nordic may draw from two previous Destroy All Humans titles: the Wii-exclusive Big Willy’s Revenge and the PS3 and Xbox 360’s Path of the Furon. However, given the terrible response of the final two films, a fresh sequel to the two numbered sequels may be on the way.