Devolver Digital is commemorating a year of huge success for Fall Guys by giving away a free Santa Claus costume for everyone and the debut of a new live-action trailer. One of the few indie games that took the gaming community by storm in 2020 after being launched back in February, Fall Guys is currently on its third season of chaos and fun.

A pastel-colored take on the battle royale genre, Fall Guys allows players to take on the role of chubby creatures whose only intent is to reach the end of obstacle courses and take the crown. If they would have a second goal, it would be to wear fancy costumes, and the development team at Mediatonic has provided fans plenty of choices to make their characters look like everyone from Sonic the Hedgehog to Santa Claus.

In the recently launched Season 3, Fall Guys integrated a few new winter-inspired minigames and revamped existing contests. One new game dubbed Ski Fall has the titular characters gliding down an icy slide and trying to dive through rings along the way. 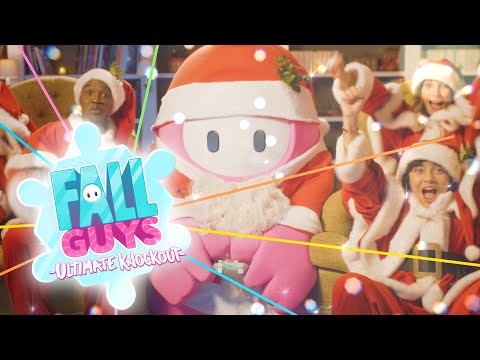 Another features three teams battling to get the most snow into their snowball Katamari-style.  There’s also a brand new final round that’s somewhat identical to Hex-A-Gone called Thin Ice. As the name implies, players have to consistently need to move on a surface that’s cracking underneath their feet, and the last player standing is the winner.

Beginning today and lasting until Christmas Day, logging into the game will rewards players with a costume that makes their characters look like one of Santa’s helpers. Considering that free cosmetics for Fall Guys are always scarce, this is a generous Christmas gift that partners well with the existing prime Gaming giveaway of a winter-inspired sweater. The Santa Claus skin was announced through a charming live-action trailer from Devolver Digital that features a Fall Guy sitting down with a family for a game after he dismantles their snowman and Christmas tree through his incompetence.

Obviously, some players don’t need the tease of the holidays to come back to the game, and the developers have something for them in the upcoming seasonal update. Titled Crown Ranks, players who keep getting wins in Fall Guys will now rank up a new meter that puts them on track to golden versions of popular costumes. Regular duds will still be available for crowns in the in-game store but now the most skilled masters of Stumble Chums will be able to display their talents and paint a big target on their backs at the same time.