After confirming that Gen 6 Pokemon will soon be added into Pokemon Go, the first wave of Kalos Pokemon arriving in the game has been leaked and will be included as part of the next update. While the Kalos region added 72 new species of Pokemon, only a few will be added to Pokemon Go during the upcoming update, for now.

Last November 18, developer Niantic revealed that Pokemon Go will be going through some major changes as part of its Go Beyond update. This new update will integrate changing seasons that reflect the current time of the year in real life as well as raise the maximum level a player can reach from 40 to 50.

Niantic also revealed that Kalos Pokemon would finally be arriving in the game following the addition of Mega Evolutions. It was also confirmed that players will be starting to see these new Pokemon in their mobile game as soon as December 2.

Gen 6 has started to be added to the game!

We have our first set of assets check them out pic.twitter.com/QAElfg3R5T

While the next update is still a few days away, players won’t have to wait until then to know which Kalos-based Pokemon are coming to the game. Thanks to an enthusiastic team of Pokemon dataminers called PokeMiners, the first 24 Kalos Pokemon have already been leaked.

While each Pokemon that has been introduced to Pokemon Go includes its Shiny form, this doesn’t mean that every Shiny form of the new Pokemon will be available on December 2. The only thing that is confirmed is that the starters and their evolutions can be encountered as Shinies, but the rest is still unknown. 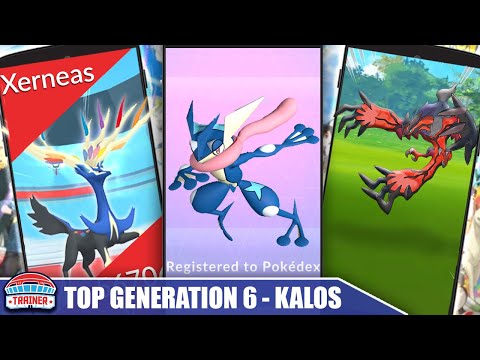 This is typical for Pokemon Go as Niantic is known to stagger the launch of a Pokemon’s Shiny form. It is also uncertain if all 24 Pokemon will readily be available after the next update is patched or if some will be released at a later date.

The Kalos region is beloved to a lot of Pokemon fans, and as such, there are going to be a lot of trainers who will be hyped about the launch of Pokemon Go’s first Gen 6 monsters. Greninja has always been a fan-favorite which will surely draw the attention of returning players. With only a few days left to go, Pokemon Go’s Kalos lineup is looking pretty impressive.