The scary season is almost upon us which means it’s the time for another Fortnite Halloween event. The latest 14.30 patch notes leaked the upcoming Fortnite skins as well as a new mobility item and a new consumable. Fortnite had to go downtime in order to release the patch last October 13 at 4 AM EST.

The developers have not officially announced the start date for its Fortnitemares event this year. In the previous years, the event has always launched during the last week of the month of October and usually rolled out with a new update. If this year’s event follows the same tradition, the event should go online by October 27 or 28.

Reputable leakers HYPEX and iFireMonkey have both posted leaks from the patch notes on their respective Twitter accounts. HYPEX also posted a clip on YouTube last October 13 featuring all of the upcoming Fortnitemare emotes, gliders, back bling, pickaxes, and character skins. 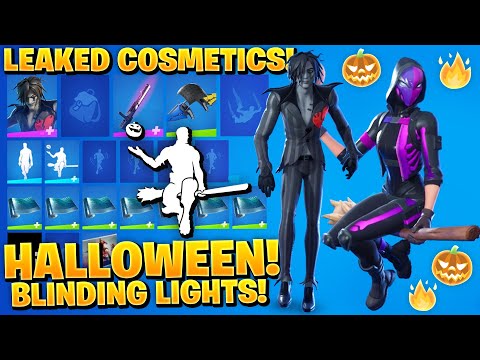 The Ultimate Reckoning Pack contains skins for La Parca, Violet, and Gnash. Gnash’s skin is a pinstriped voodoo creature and looks like a mini edition of himself. Violet will receive a savage-looking skin that features razor-sharp UV wings. Meanwhile, La Parca’s new skin wraps her in orange roses and leather and comes with black bling.

The Crypt Crashers Pack contains an all-female group of skins such as those of Nightsurf Bomber, Arachne Couture, and Midnight Dusk. Midnight Dusk sports a sleek vampire with pink hair and stylish leather gloves.

The Arachne Couture skin, on the other hand, features creepy vibes with her hat with eight eyes and spiderweb-styled leggings. The Nightsurf Bomber wears a dragon llama top and scary glowing scars. The back blings coming along with the skins are the Firebreather’s Daypack, Batty Backpack, and Arachnid Tote.

There are also three pickaxes inside the pack which are the Vamp Axe, Webspinner’s Slice, and Dark Days. It also looks like that there is a Fanged Fashion Pack which will be available for purchase via V-Bucks inside the game’s in-game shop. The pack will contain The Crypt Crashers Pack’s three pickaxes but will not include the back blings and skins.

The Daredevil Bundle will also be coming to the game which will introduce the Daredevil Skin, Daredevil’s Billy Club Pickaxe, Devil’s Wing Glider, and Radar Senses Back Bling. The Daredevil will come in two variations – the classic Daredevil and Illustrated Daredevil skin. The latter variation looks like it came straight out of a comic book.

New consumables will also be coming as per the patch notes including forged items in the Candy Buckets. The new consumables include Thermal Taffy, Jelly Bean, Candy Corn, Hot Drop, and Pepper Mint.it still uncertain if these Candy Buckets will take over the Produce boxes.

A few map changes have already been appearing in the game ahead of the Fortnitemares celebration. Buildings in famous locations including the Sweaty Sands, Holly Hedges, and Retail Row are now embellished with spiderwebs and other Halloween decorations. The store located just outside Holly Hedges has been transformed into a Halloween shop, complete with new signage. Ultimately,  with all the improvements coming to Fortnite, players can expect more map enhancements soon.