Atlus has been on a roll when it comes to the promotion of its upcoming English release of Persona 5 Strikers. Now, another trailer has been released for the anticipated sequel of Persona 5, although this time it’s not as long as the previous trailers.

That being said, it’s worth mentioning that the thirty-second trailer was initially uploaded on Atlus West’s official YouTube channel, albeit as an unlisted video. However, it has since been used to promote the game on different social media platforms like Instagram.

Although this trailer in question is nowhere to be seen on Atlus’ official YouTube account, many fans and other sources were able to save the video, including the Persona YouTuber popularly known as Faz. This latest trailer, otherwise dubbed as the All-Out Action trailer, showcases never-before-seen footage of the different members of the Phantom Thieves in action.

Not only that, the trailer lets us hear a couple of new voice lines from the English cast. Of course, this is a cause for excitement for many, especially since several fans have been looking forward to hearing what the English dub would sound like. 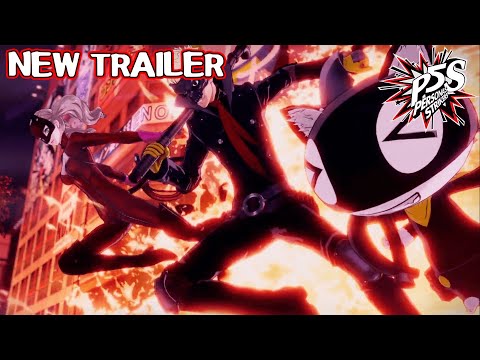 Some of the new lines included in the trailer are of Morgana informing the other members that there are too many Metaverse “jails” within their vicinity. More specifically, Morgana says, “If these other bizarre incidents around Japan are genuine changes of heart, that means that there are probably more jails out there.”

There’s also another line said by Ryuji, which goes “Awww, we’re taking the Phantom Thieves to a whole new level!” As most fans know by now, especially those who have been keeping up with Persona 5 Strikers updates, the upcoming title will feature two new characters, one of whom is Sophia.

Sophia is a new character who joins the Phantom Thieves, and the All-Out Action trailer briefly shows her fighting off shadow enemies. While Atlus has yet to reveal more information about the AI girl, we do know for certain that she’s going to be one of the playable characters early in the game.

Persona 5 Strikers is set six months after the events of Persona 5, and Joker and the rest of the Phantom Thieves are set to go on a fun road trip for the summer. However, things don’t go the way as planned when strange occurrences begin to take place in Japan.

As a result, the Phantom Thieves find themselves putting the fun trip on hold, as they have to journey to the Metaverse, get to the bottom of things, and save the people from imminent danger. What makes Persona 5 Strikers different from its parent game, however, is its gameplay mechanics.

More specifically, Persona 5 Strikers will be straying away from its usual turn-based combat and will be utilizing musuo-style combat mechanics instead. In other words, it will be similar to the play style of Dynasty Warriors or the highly acclaimed Hyrule Warriors: Age of Calamity.

Not only that, this upcoming title gives players the opportunity to control the different members of the Phantom Thieves, although the exception to this would be Futaba, who is the navigator.