Primary PS4, the PlayStation 4’s game sharing feature, was something that a lot of PlayStation owners found themselves using so a bunch of gamers could play one game without having to purchase multiple copies. Sony has confirmed that the PlayStation 5 will also have this feature as players move over to it, just with a different name. Aside from this, the feature will be receiving an update that makes it even simpler to use on the PlayStation 5.

Primary PS4, as the name conveys, allows players to set up one PlayStation 4 as their primary home console. Doing so allows anyone that uses the Primary PS4 to access its entire collection of media and video games, even if they sign up for it using another account.

On the PlayStation 5, this feature will be called “Console Sharing and Offline Play.” It will generally offer the same service as the Primary PS4, allowing multiple players to access one account’s digital content, even if the console isn’t connected to the internet. 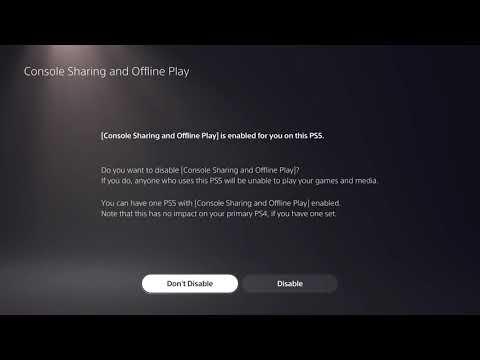 According to various gaming news outlets, only a single PlayStation 5 will be able to have Console Sharing enabled at one time, but the feature can be toggled on or off at the decision of the owner. If owners want to change switch their primary PlayStation 5 console, they can.

Accessing the Console Sharing and Offline play feature is easy via the PlayStation 5’s brand new user interface. All players have to do is:

By default, a brand new PlayStation 5 will automatically have this feature enabled, but players can always toggle it on and off. Sony also verified that the PlayStation 5’s Console Sharing feature will not interfere with the Primary PlayStation 4, so anyone trying to play with both consoles using a single account can do so without having to worry about always disabling the feature.

Ultimately, Console Sharing is great news for fans of the Primary PS4 feature. It’s always likely for a gaming console or any kind of technology to lose a famous feature when it transitions from one generation to the next, so it’s great to know that the Primary PS4 managed to avoid this.