Pokemon Go: All features and bonuses during the Niantic Anniversary Event

Pokemon Go players can now prepare for the upcoming 5th-anniversary celebration event of Niantic in the mobile game. Here are the dates, bonuses, exclusive features coming to Pokemon Go.

The summer events in Pokemon Go might be over but this doesn’t mean that things will be slowing down in the mobile AR game. The holiday events running from before Halloween all the way after the New Year keeps fans busy even as the weather gets colder. However, the festivities are starting earlier this year because of shorter events throughout the last days of September until the start of October.

With the events celebrating Fashion Week already underway, most players are now busy hunting shiny Pokemon and exclusive hats. The hype continues to heighten this weekend as another set of exclusive events become live in celebration of Niantic’s 5th anniversary in Pokemon Go. 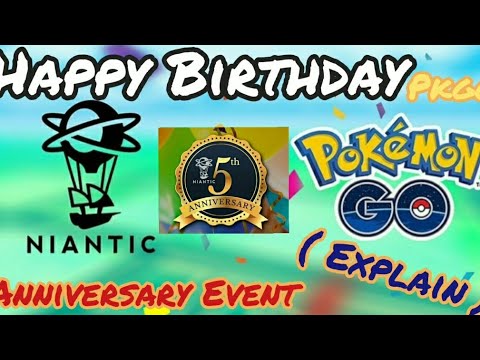 Even though the Niantic anniversary events are not as exciting as the yearly Pokemon Go anniversary celebrations that happen during the summer, it is still a fairly worthwhile event with a few decent freebies.  The Timed Research allows players the opportunity to get a few helpful items like Egg Incubators, TMs, and other bonuses such as additional XP for players who are still on the journey to the endgame.

Niantic’s Anniversary event starts on October 4, 2020, Sunday from 11 AM to 5 PM on your local time.

Team Rocket Balloons will be appearing throughout the event.

There will be a 1 PokeCoin exclusive anniversary box that will be available in the in-game shop starting October 3 until October 5, 2020. This box will contain 30 Ultra Balls.

The full information for all of the challenges and rewards players can get from the Timed Research event will soon be revealed which will offer a better look at how rewarding this event will be for Pokemon Go fans who are not interested in additional XP bonuses.

It will be intriguing to observe what will happen in the storyline and see what it has to offer to a community that is already in the endgame. Hopefully, the developers are preparing for more surprising events along the way.

For now, Pokemon Go players should be able to continue playing from their homes and continue capturing the newly released Unova Pokemon in the game and get closer to completing their Pokedex.