Supergiant Games’ Hades, which first launched back in 2018, received a lot of praise and acclaim from players and critics. Seeing as we’re now in 2021, we can imagine that gamers who enjoy video games similar to Hades will want to dive into something new. Well, in that case, we have good news!

Developed by Mad Mimic, there’s a brand-new rogue-like game on the horizon. Entitled Dandy Ace, the upcoming title follows the story of a fabulous magician who is trying to break free from a cursed mirror. Now, Hades fans may find that Dandy Ace’s attempts of escape are similar to the way Zagreus tried to break out of the underworld.

To keep fans excited for the upcoming rogue-like, Mad Mimic has recently released a trailer for the game, as well as a release date. Because of this latest drop, fans now have a better idea of what they can expect from Dandy Ace and when they can finally experience the game first-hand. 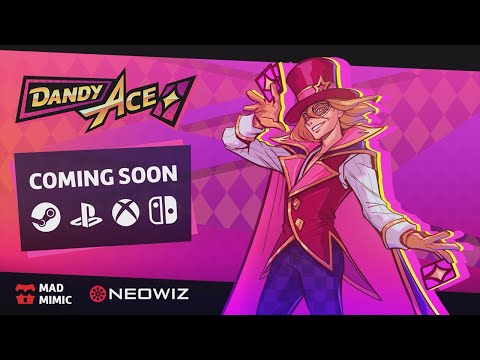 The new trailer, which was uploaded on IGN’s YouTube account, showcases many of the game’s features—such as the different cards that the titular Dandy Ace will be utilizing as a medium for his abilities, boss designs, as well as character designs. The trailer also features Axolangelo, an axolotl painter and arguably one of the most “bizarre bosses” in the upcoming game.

Thanks to this new trailer, excited fans finally know when Dandy Ace’s release date will be for PC via Steam, which is March 25, 2021. Mad Mimic hasn’t announced when the game will be heading to consoles, though.

One gameplay feature in Supergiant Games’ Hades that many fans loved was when the different Olympian gods bestowed different abilities to Zagreus to help him try and escape the underworld. Dandy Ace, on the other hand, actually has a similar system in place.

However, Dandy Ace won’t be receiving help from different allies he meets along the way—instead, the abilities he receives and utilizes are from the various cards he stumbles across for the duration of his journey.

That being said, Hades and Dandy Ace have other similarities as well. One of the gameplay elements in Hades that made it such an approachable and likable game compared to other similar games in the genre can also be found in Mad Mimic’s upcoming rogue-like.

Specifically, the gameplay element in question is the player’s ability to acquire upgrades and items that will remain permanently. Through this, players will definitely be able to escape the enchanted mirror and consequently win the game if they just remain persistent and keep trying.

However, there’s one feature in Hades that isn’t present in Dandy Ace—and that’s fine! They’re completely different games, after all. That said, the missing aspect is Hades’ contextual character interactions. This was definitely an interesting gameplay element that Supergiant Games implemented into the story, as the different characters whom Zagreus encountered on his journey would usually respond or comment on the different things the player character had done so far.

In any case, given what we know about Dandy Ace, it seems to be an exciting new rogue-like with an interesting cast of characters. It’s a game that Hades fans should definitely check out once it releases on March 25.