The original 2018 version of the Spider-Man game had a wide range of suits for players to choose from, and each one of them had a unique design as well as a special suit ability so that they won’t be similar to each other.

That being said, it seems that the upcoming title Spider-Man: Miles Morales will also have a variety of suits that you can use, though we’re beginning to think that they’re a tad more unique than the previous game because one suit features a cat sidekick.

Game Informer posted a video recently showcasing the gameplay for Miles Morales, which also introduced the feline companion. Amusingly enough, the cat is apparently also called “Spider-Man” and Miles carries it around in his backpack.

In the gameplay footage shared by Game Informer, the cat is returned to its owner who is a convenience store clerk. From what we can see based on their adorable and wholesome reunion, these two have a really strong bond.

That being said, it’s revealed near the end of the video that in one of Miles’ suits, you will be given the option to carry the adorable feline with you using Miles’ backpack. What makes this even cuter is the fact that the cat also has its very own Spider-Man mask.

If you need a companion as you go about your missions, the cat will definitely be a great choice because it can help you finish off enemies by launching out of Miles’ bag. This concept is definitely one-of-a-kind, especially when it comes to Spider-Man’s suits, so we can only expect it to quickly rise to the top of the list of fan-favorites. 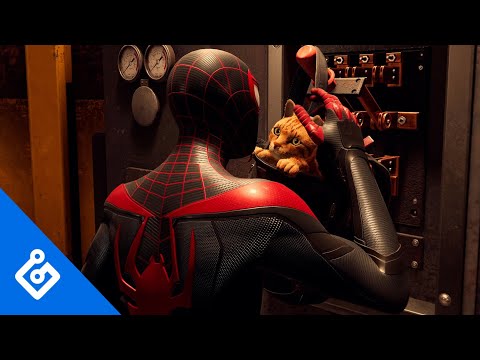 So far, other suits on Spider-Man: Miles Morales’ roster have pretty unique and striking designs, too. One other example we can think of is the suit with the “Stussy S” on it, which is definitely a ’90s Easter egg.

That being said, Miles Morales isn’t considered to be a sequel to the first title, so we still don’t know how many suits Insomniac Games will include in it. As such, we have yet to find out if the developer is planning quality over quantity, or if they want to provide fans with variety.

Fortunately, fans don’t have to wait too long to find out because the title is expected to release in about a month. Out of all the upcoming PS5 games, Spider-Man: Miles Morales is definitely one of the biggest on the list.

For one thing, the game will be exclusively available on the PlayStation. Not only that, the Ultimate Edition of Spider-Man: Miles Morales will include the PS5 remaster of the 2018 Spider-Man. In any case, you don’t have to worry if you weren’t able to pre-order Miles Morales for the PS5 because Insomniac Games will still release it on the PS4.

As the upcoming title’s release date draws nearer and nearer, we expect that more suits will be revealed, although the dev team will probably want to keep a few surprises for the game’s launch.

Among Us Coming to Xbox and Xbox Game Pass Next Year