It came as an unexpected surprise when it was revealed during The Game Awards 2020 that Sephiroth will be joining Super Smash Bros. Ultimate’s roster as a playable DLC fighter. A new video showcasing the character’s gameplay overview was recently dropped as well, which significantly increased the fans’ excitement.

Most Super Smash Bros. Ultimate fans didn’t expect that another character from Final Fantasy 7 would make an appearance. In fact, no one really thought that Final Fantasy, in general, would be represented at all.

However, this doesn’t mean that the announcement wasn’t well-received. That being said, the recent Sephiroth showcase was meant to give fans a glimpse of what the antagonist will be bringing to the table, but it also revealed when the character will officially go live.

It turns out that excited fans who can’t wait to test out the Final Fantasy 7 character won’t have to wait for long, as he’s scheduled to release this December 23. 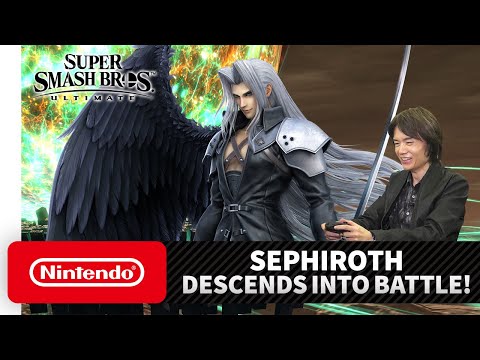 Naturally, players should expect that there will be a deluge of Sephiroth users as soon as the character goes live. As a matter of fact, it’s highly likely that tournaments will feature several Sephiroths for an amount of time, and that Super Smash Bros. Ultimate content creators will be playing and having discussions about him.

Many players from the Smash community have analyzed Sephiroth’s style of fighting from the reveal trailer, and they were able to conclude that he can fight at significantly long ranges due to his long sword.

As such, spacing is crucial for those who want to master Sephiroth in Super Smash Bros. Ultimate, especially since one strength of his is the ability to deal major damage to enemies while at a safe distance. In addition to that, he has pretty decent special attacks that offer players a wide range of utility.

For instance, he has a side special that will put pressure on his enemies, along with a defensive skill for those who get too close to the character.

Among other things, Nintendo also announced new Mii Fighter costumes. These include familiar costumes based on iconic characters by Square Enix, such as Geno and Barrett. Not only that, hats based on Tifa, Aerith, and even a Chocobo have also been introduced. With all these amazing new content, Sephiroth’s DLC pack is turning out to be a dream come true for many Final Fantasy fans out there.

The only downside to this, however, is the fact that Geno as a DLC fighter most likely won’t become a reality. Still, it’s great that he’s still included in the game in some way. The Sephiroth showcase definitely gave us an idea of the character’s capabilities, but players won’t know the extent of his powers until they try him out for themselves.

It would definitely be interesting to see how the villain will handle against Super Smash Bros. Ultimate’s diverse roster of playable characters, especially since his reveal trailer made Sephiroth look incredibly powerful.

In other news, fans who can’t wait until next week for his official release can actually play him early by beating his boss battle. Players who have already bought the DLC pack should check that out.