To commemorate the launch of Episode 2: Act II, the famous competitive first-person shooter Valorant is launching a new hero and a new combat bass. Since its January debut, Episode 2: Act I of Valorant has been running for the past two months. Players have been reaching the competitive grind with ferocity after Act I revamped the competitive ranks with improvements to the progress bar and the latest Escalation mode.

Yoru, the newest agent, was introduced to the Valorant players in Act I. Yoru, a duelist from Japan, introduced a new level of Valorant tactics. Yoru introduced another high-damage threat who could slip in and out of battles with his ability to walk across realms and teleport to a personal tether. Act I also introduced a new Act I Battlepass, which enabled players to access titles, sprays, player cards, and skins.  Dot Exe skins and Ignition skins were among the most common.

Act II will be introducing a new agent, Astra, as well as several new content in the form of cosmetics in the battle pass. As in the past, the battle pass would contain both free and paid unlockables, with the latter costing 1,000 VP (roughly $10).

The unveiling of the newest agent, Astra, is what most Valorant fans are looking forward to in Act II. Her identity was first revealed in a leak back in January, although much of the specifics proved to be erroneous. The new agent, who hails from Ghana, can manipulate space, transform into astral form, and use her radiant strength to command the battlefield. 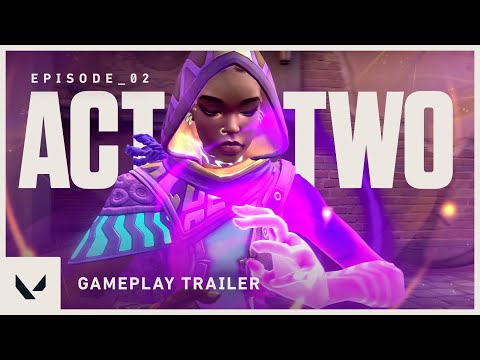 Before she can use her other powers, she must first reach the Astral Form to position stars. Her stars can also use Cosmic Drive to deflect missiles, but they also trigger her other powers. Gravity Well, which draws enemies into the target’s core before exploding, and Nova Pulse, which concusses surrounding enemies, are two examples.

Overall, Valorant players should be looking forward to the beginning of a new line of content. Valorant’s key gameplay is getting a new twist thanks to Astra’s addition of new elements to shift the flow of combat. To the delight of fans, players would be more motivated to hop into the game and grind for all of the latest loot.