A lot of World of Warcraft gamers who play on the Khadgar server has been experiencing an extremely strange and terrifying bug wherein their character’s level gets dropped from 120 to 85, which was the level cap in 2010 when Cataclysm was initially released.

Fortunately, Blizzard is aware of the current situation and they are performing an ongoing investigation as to the cause of the glitch. They have also confirmed that the characters are safe and that they have not been permanently deleted.

Players started making reports of these issues on the World of Warcraft forum as well as on Reddit yesterday. YouTuber MadSeasonShow also posted a video today saying that almost every one of his dozen characters were either missing or had been changed.

It gets stranger — MadSeasonShow goes on to say that he now has a level 81 Death Knight character named “Bagina,” but this is actually an older version of his current level 110 Death Knight which he renamed to “BadSeason” a few years ago.

Not only that, but a Warlock character he once deleted is now back in his account as if it wasn’t sent to the void a few years back. 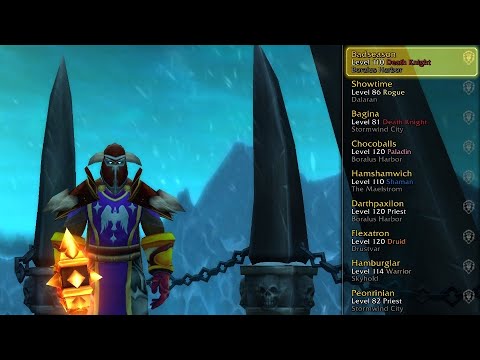 The YouTuber also noticed that many of his characters are not where he left them. In fact, some characters are even a part of player-created chat channels that he used to be a part of back in Cataclysm.

Blizzard has yet to confirm the cause of this glitch, but they have acknowledged the problem on the World of Warcraft forums. They also confirm that they are currently investigating it.

Here’s what we think may have happened: it’s possible that a much, much older backup of World of Warcraft’s character data accidentally got fused with the current version of the title.

Many players have mentioned that Khadgar is currently going through a merger with a different server in order to boost the player population. This seems like a possible cause for this whole mess, but we have yet to wait for an official announcement from Blizzard.

In summary, don’t panic if you play on Khadgar and you find that your characters are either missing or have de-leveled. Everyone is crossing their fingers that this will all be resolved soon so that players can go back to the way things were.

However, we completely understand how frustrating this situation must be. One player posted on the World of Warcraft subreddit saying that his guild was so close to being the first on the server to win against the latest raid on the highest difficulty.

However, they had to postpone their future attempts until further notice because their main tank’s character has gone missing due to the glitch.

It’s definitely a difficult time right now for many World of Warcraft players, but don’t lose hope! The fact that Blizzard is aware of the situation is a good sign that things should be back to normal soon.

Bitcoin market dominance has fallen to its lowest level since 2018