Insomniac Games has released about seven minutes of new Ratchet & Clank: Rift Apart gameplay, most of which features Rivet. The production team has teased the lady Lombax on several occasions in recent months; however, Rivet’s name and backstory were unveiled in a trailer released at the end of last month.

Rivet hails from another world, one where her opposition to Emperor Nefarious wins her scorn. The latest character also has a bionic arm, but the reason for this augmentation is unknown for the time being.

There are plenty of other details about Rivet that are still unknown, but details should emerge as the game progresses, particularly because she is a confirmed playable character. Fans would not, though, be left alone with a new hero. Clank will accompany rivet on her dimension-hopping adventure. Fans of the Ratchet & Clank franchise should also expect playable portions featuring the titular Ratchet.

Game Informer released seven minutes of gameplay footage from Ratchet & Clank: Rift Apart today. Although there are a few glimpses of Ratchet in action at the end of the film, Rivet is the game’s focus.

She can be seen wielding a number of new weapons, including her ax. Rivet also grinds from rail to rail at high speeds around a level in a few on-rails sections. These segments, though, aren’t as easy as they were in previous Ratchet & Clank games. As seen in previous gameplay footage, wall-riding sequences and long jumps help break up the on-rails action. 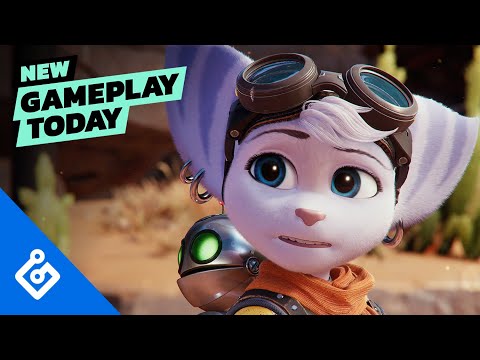 The above video, in particular, gives a better look at the new agility choices used in Rift Apart, such as the dash mechanic, wall-running, and the Rift Tether, which enables characters to leap through dimensional tears. When the game’s summer release date approaches, Insomniac Games is sure to reveal more gameplay. Fans, on the other hand, have plenty of videos to consume for the time being.

The third big exclusive for the PlayStation 5 is Ratchet & Clank: Rift Apart. Demon’s Souls was, of course, the first, releasing alongside the console’s November 2020 launch. Returnal, which was recently launched, was the second PS5 exclusive, offering PS5 owners access to a demanding rogue-lite from the Finnish studio behind Resogun.