Home Cryptocurrency Monsterra is the first dual-chain P2E game on both the BSC and...

The play-to-earn (P2E) sector that emerged from the decentralized finance (DeFi) area over the previous year propelled the crypto market to unprecedented heights, threatening to bridge the gap between conventional entertainment and the blockchain sphere.

With the debut of Monsterra on Binance Smart Chain (BSC) and Terra Chain, a new gaming project is now bridging boundaries between different blockchains. BSC is the Ethereum-compatible blockchain created by the team behind the world’s largest centralized exchange Binance. It provides users with a platform for developing quick, low-fee decentralized applications (dApps).

On the other hand, Terra Chain is a decentralized payment network that also hosts a number of dApps. Surprisingly, Terra Chain recently became the world’s second-largest DeFi platform based on the dollar value locked inside its protocol – a figure of no less than $18.2 million.

Why Are Two Chains Better Than One? The P2E NFT game will first be available on the Binance Smart Chain before spreading to Terra in Q2. The dual-chain debut is encouraging for would-be gamers who are generally limited to a single network – i.e., the blockchain that a project’s team first decided to build on.

Of course, the Monsterra team isn’t releasing on two chains to be different. BSC was chosen as the virtual platform due to its large user base and stable ecology, making it an appealing venue for gamers, particularly those put off by Ethereum’s exorbitant transaction fees.

Meanwhile, Monsterra’s expansion to the popular Terra platform underscores the company’s close partnership with the Terra Foundation. Monsterra will benefit from a bridge that ties BSC to Terra, allowing gamers to enjoy the best of both chains moving forwards, in addition to becoming one of the first games in Terra’s expanding metaverse.

In the game, players fight fights with mystical monsters known as Mongens to gain land, create farms, and construct their properties. Mongens have five distinct beginning forms, each with its own set of unique features and powers that impart different playstyles on the player.

Gameplay takes many forms, with players able to initiate attacks on other competitors’ domains and attempt to beat the defending Mongens with their army. Arena bouts promise dramatic head-to-head combat, while boss challenges pit participants against hostile monsters as they explore a magnificent yet hostile landscape.

In between conflicts, players can acquire unique rewards by locating secret reward tokens and figuring out how to exploit them.

The Exploding Play-to-Earn Market In 2021, blockchain developers recognized the potential for gaming finance to attract more consumers to the crypto realm than had previously been thought conceivable. 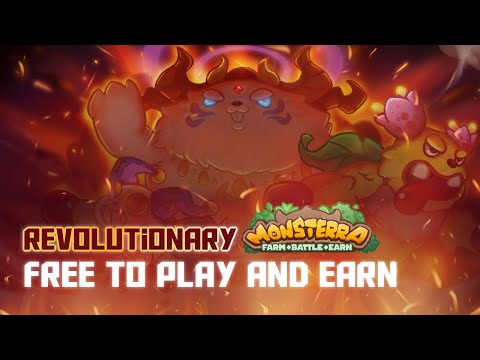 Gamified finance, or GameFi for short, delivers amusement while arming its users with the principles of financial autonomy and independence that the bitcoin sector has long promoted.

The mainstream gaming business is believed to be worth $300 billion, which is expected to rise more in the future years. While blockchain developers compete for a piece of this ever-expanding pie, mainstream publishers are also making inroads into the blockchain realm, as evidenced by several prominent gaming organizations’ recent adoption of the metaverse and NFT technologies.

The connection between blockchain and gaming continues to attract attention, and Monsterra is making a big statement by debuting on two popular networks right away. The game’s development intends to build a substantial user base through giveaways, bounties, and community activities this year. New player modes will also be launched, and the debut of the dual-chain MSTR token on the DEX will be utilized for NFT transactions, in-game upgrades, and other defi activities.