For the game’s latest 1.5 update, Tesla worked with PUBG Mobile to make the fictitious island of Erangel the site of a new Tesla plant. The collaboration isn’t entirely unexpected, given that PUBG Mobile is one of the most popular games on the planet, and Tesla is growing active in the gaming business.

PUBG Mobile was initially published in 2018, a year after the PC version of PlayerUnknown’s Battlegrounds. In only three years after its release, PUBG’s mobile version has reached one billion downloads globally, making it one of only five mobile games to make over $1 billion in 2020.

The free-to-play franchise is regarded as one of the forefathers of the battle royale genre, which has grown in popularity because of new releases such as Fortnite. Given PUBG Mobile’s huge reach and worldwide audience, it’s understandable that many businesses would leap at the chance to include their products into the game.

In honor of the 1.5 update, PUBG Mobile released a 30-second video on its YouTube page that provides fans a behind-the-scenes peek at the Tesla partnership. The game’s Tesla automobiles, such as the Roadster, are seen in the teaser.

Players may build and drive away in their preferred Tesla model in the PUBG Tesla Gigafactory. The factory’s automobiles are said to be self-driving and capable of transporting gamers to various areas around Erangel. Additionally, players traveling the island may come upon Tesla semi-trucks, which, if damaged, give a variety of goods.

The cooperation with Tesla isn’t the first time PUBG Mobile has used cross-promotional tactics. Mountain Dew vending machines were added to PUBG Mobile for a limited-time event in September, pushing players to gather Mountain Dew cans that they could later trade-in for combat points or unique goodies. 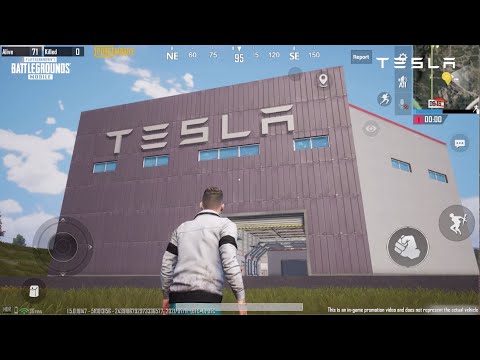 Tesla, on the other hand, is no stranger to the game business. The Tesla Arcade gaming function, which is endowed with 10 teraflops of computing power in the Model S, is available in recent Tesla models. The Tesla Arcade on the Model S is so powerful that Elon Musk, the company’s CEO, bragged that it could run Cyberpunk 2077.

It’s unclear whether the new Tesla components would improve PUBG Mobile’s gameplay, but the cooperation may be the first of many with third-party companies in the future. Fortnite has already proved that innovative partnerships with companies like Marvel and the NFL help keep players engaged in an ever-changing pop culture environment, and PUBG Mobile has the opportunity to do the same.

If the game’s billion players well accept the integration of Tesla’s products into PUBG Mobile, fans may expect similar cross-promotional events with other businesses in the future.