The Best Sword Enchantments Players Must Have in Minecraft

Enchanted swords are the most powerful weapons available in Minecraft. When it comes to survival in any Minecraft environment, they are a must-have in any serious player’s first inventory slot.

More enchantments are applied to the game as time goes by to refer to the player’s swords. They’re becoming much more strong as a result of this. In every Minecraft setting, here are the top five enchantments that players should have on their shield. In any PvP war or mob ambush, these enchantments would guarantee success.

How To Enchant A Sword 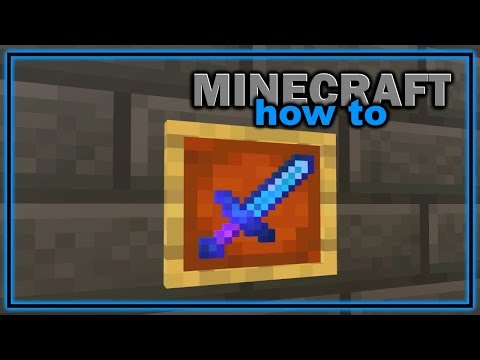 You’ll need an Enchanting Table to begin enchanting your blade. This is a mid-game item that costs 2 Diamonds and 5 Obsidian to create. If you do have a Diamond Pickaxe, you’ll need 5 Diamonds. Surround the Enchanting Table with 15 Bookcases until it’s been made, and you’ll be able to use the top-level enchantments.

If you have some Enchanted Books, you can use them within an Anvil with your Sword. Combine the two, and you’ll have the choice to rename your Sword here. Such enchantments can’t be used together.

For those who want to put some space between themselves and their opponents, the Knockback spell is extremely useful.

Probably the least favorite in the Minecraft community, Knockback is a sword enchantment that puts a bit of extra knockback force with each hit. Normally, your sword will deal with a small amount of push force (plus the base damage) that will knock back your enemies for around 2-3 blocks. But with Knockback enchantment, you can send them flying around 6-7 blocks away from you.

It’s an effective crowd control enchantment if you’re in a tight spot, especially on Hardcore mode, where it is the most useful. But for Survival, you don’t really need it since your goal is to kill enemies, not to push them away.

Combine Knockback with a bow to easily dispatch your opponents before reaching you or sending them spiraling into the void below.

Spiders, cave spiders, silverfish, Bees, and Endermites are all affected in the game. The harm done to these enemies is increased by the Bane of Arthropods. For every hit, the impact adds 2.5 extra damage per stage. The arthropod will be dealt 1-1.5 seconds of Slowness IV at level one; the cap is raised by 0.5 seconds per level of BoA. (up to 3.5 seconds). It has a maximum power ratio of V. Bane of Arthropods cannot be combined with Sharpness or Smite.

You can destroy the spawning monsters more easily if you have an XP farm with cave spiders or spider spawners. Silverfish produces in the strongholds, while Endermites are normally located on The End.

Sweeping Edge III is a fantastic Minecraft enchantment for players who find themselves surrounded by angry mobs on a regular basis. This is a must-have magic for unfortunate or clumsy players’ blades since it significantly extends the length of every weapon. More damage may be due to nearby mobs as a result of this.

Once a player has been cornered, an enchantment like this is needed. It does the most harm and injures the most mobs. This encourages players to either make their way out or fight their way to victory.

Fire Aspect imbues the blade with red hot flames, as the name implies. This spell sets the target ablaze for up to four seconds, inflicting burning damage on all enemies who come into contact with it.

While the bulk of Minecraft mobs are vulnerable to Fire Aspect’s flaming slashes, a handful are resistant. Since Nether exclusive mobs are inherently fire immune, it’s better to stop utilizing this enchantment while slaying them.

It’s cursed, as you’ve read in the name of the enchantment. With the Curse of Vanishing, you will forge your sword in tragedy and have it vanish before you die. This enchantment has no effect on the total attack damage of your shield, nor does it improve the toughness of your blade. It does, though, give you a sense of realism in knowing that if you die, your weapon dies with you, regardless of how strong it is. Unless you’re roleplaying, it is highly recommended that you don’t use it.

The Curse of Vanishing is an enchantment that causes an object to vanish when the player controls it dies in the game. After death, items with this spell will absolutely disappear rather than being dropped. Although this enchantment isn’t useful in Survival, it’s useful if you’re on a PvP server because it prevents enemies from stealing your items.

Unbreaking III is a popular Minecraft enchant on almost any player’s weapon, as it improves the sword’s endurance tenfold. It’s a good idea and try and get Unbreaking on a tool when players have worked hard to have enough of the enchantments on their possessions. It will help the player hold the object for as long as possible.

The sword in Unbreaking III is destined to outlast the player. This enchantment comes highly recommended, particularly because it’s easy to come by on enchantment tables.

If you’re trying to farm particular mobs or want to be rewarded with more supplies for your valiant efforts, the Looting enchantment may help. This spell will even boost the drop rate of rarer monster ingredients, which will make it much cooler.

Looting III is a top-tier choice for treasure hunters and those looking to increase the game’s RNG. Not only can it improve the odds of obtaining decent loot from mobs, however, it often helps the player to gain a significant increase in the amount of loot that can be obtained from utilizing this enchantment on a regular basis, though not on a consistent basis.

You’re trying to kill a cow for its raw meat and leather, for example, which they normally drop at around 1-3 and 0-2. You should expect between 2-4 and 1-3 fall from Looting III, which is a decent number. If you want to speed up your monster hunting, use the Looting Enchantment.

Do you want to take on the Wither? You will want to use a Smite-enchanted sword. Smite improves the damage dealt with undead mobs, including skeletons and zombies.

Smite V is a game similar to Bane of Arthropods, but it focuses on zombie monsters. In comparison to BoA, this is fairly effective much of the time because the undead-type has the most variety of mobs in the game. The following are examples of undead creatures:

Any strike from the smite impact does an additional 2.5 damage per stage. It will have a power ratio of up to V, causing an undead mob to take up to 12.5 additional damage on a non-critical strike.

If you have skeletons and zombie XP farms, this enchantment is also useful. Sharpness is a better enchantment for multipurpose blades (swords that can effectively destroy other mobs besides zombie mobs).

Note that the Bane of Arthropods and Sharpness V do not stack with Smite V. You must pick one of the three swords to hold in your possession.

When it comes to almost any Minecraft instrument, sword, or piece of armor, mending is a must. It leaves a player’s possessions gleaming and fresh as long as he or she is earning XP. This enchantment is far more potent than any unbreakable enchantment because it effectively immortalizes any player’s gear.

All the player has to do to make the mending enchantment work is collect experience by any means available in the game. XP can be earned by participating in a variety of game events. Killing crowds, smelting ores, frying foods, breeding mobs, and trading with peasants are all options.

The one drawback to the Minecraft mending enchantment is that it is very difficult to get since enchanted books can only obtain it. These books can be obtained by bartering with villagers who work at a lectern. Many players use boats to carry villagers to their homes or bases.

Sharpness is similar to the magic Bane of Arthropods in that it increases the harm of your blade. Sharpness V is regarded as one of the strongest enchantments in the game, as well as a jack-of-all-trades in terms of damage production, capable of dealing with any kind of mob.

Sharpness V basically increases the sword’s outgoing damage by 3 attack damage. With each rise in enchantment level, the blade becomes sharper, deadlier, and even more destructive. Smite V (extremely powerful against Undead-type enemies) and Bane of Arthropods are two stronger enchantments for various types of enemies (very good against bugs). This is what you’ll wear if you really plan to go on a spree.

When combined with the game’s most powerful swords and axes, this spell can be leveled up to five times, making it completely devastating.

No Man’s Sky: Origins Is Released Today And It’s Bigger Than Ever