The Walking Dead’s Maggie and Negan Join The Brawlhalla Roster

Another significant crossover is coming to Brawlhalla, with the game repurposing an intellectual property it previously used. Brawlhalla, a free-to-play fighter from Blue Mammoth Games, is joining up with AMC’s The Walking Dead. In the past, the Super Smash Bros.-style fighter has been known to spice it up with exciting crossovers, and now two major characters from The Walking Dead have been added to the mix.

Last year, Michonne, Rick Grimes, and Daryl Dixon were added to Brawlhalla, bringing it closer to The Walking Dead. This time around, the game is welcoming Negan and Maggie to Brawlhalla as members of the roster. The new combatants will be available to fans in approximately a week.

On September 22, Negan and Maggie will arrive in Brawlhalla. The most recent teaser not only shows when the characters will be accessible to fans but also their design and how they will interact in the game.

In the video, Maggie uses a sign and a shovel to take down enemies for Brawlhalla, a fighter that focuses on melee weaponry. Meanwhile, Negan is shown holding his trademark barbed-wire-wrapped baseball bat (which he calls Lucille). Michonne, Rick Grimes, and Daryl Dixon, characters from the original The Walking Dead crossover, are also featured in the teaser.

Since the game’s release, Blue Mammoth Games has consistently provided Brawlhalla with a plethora of unique crossover content. The variety is what fascinates me. There has been crossover material based on real-life WWE characters and actors from The Walking Dead, but there has also been crossover content found on the Dreamworks animated films Brawlhalla and Kung Fu Panda. Brawlhalla crossover material is always surprising and exciting, whether it’s in video games, cartoons, TV shows, and more. It keeps gamers coming back for more since they like learning new skills and defeating foes with different skins. 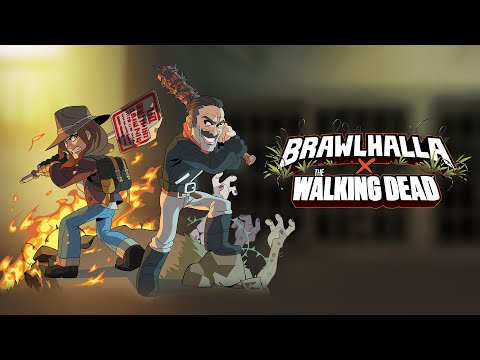 Aside from all of the crossovers in Brawlhalla, the game’s free-to-play aspect is a big part of its appeal. Many other free-to-play games aren’t battle royales, but Brawlhalla looks to have found its own fun and even competitive combatant among them.

The game’s ongoing support with new material undoubtedly helps, but gamers may dip their toes into the enjoyment for free before purchasing any of the stuff. That is a recipe for success when you have a strong DNA.