Animal Crossing: New Horizons was only released earlier this year, yet it has already received a variety of new features and content thanks to its regular updates that don’t cost a single cent. Each new major event or holiday in New Horizons also means the addition of several new activities and furniture for players to enjoy.

Now, Nintendo and players alike are getting ready for the release of the latest update, which is scheduled to go live this November 19. This time around, fans can look forward to a bunch of winter and holiday-themed content and events.

Among these new inclusions, it appears that Animal Crossing: New Horizons will be bringing in two new NPCs. The first one will make an appearance during Turkey Day, which is the game’s version of Thanksgiving, while the other one will arrive during the Christmas season.

That being said, these two will be more than just visitors. Based on the new Winter Update trailer, the two new special NPCs will be asking assistance from the players, asking them to do a variety of tasks related to their respective holidays. 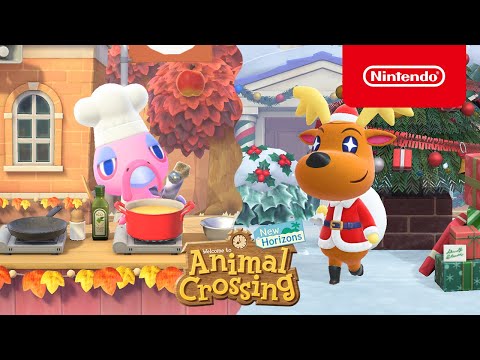 First up we have Franklin, who is a turkey that shows up on your island during Thanksgiving or Turkey Day. When he arrives, he will ask you for help as he cooks a fantastic Thanksgiving feast for all the villagers.

Since he’s known to be a professional chef, he will most likely do most of the cooking. However, you can still help him in other ways. Based on the trailer, we can see that players are expected to collect a variety of ingredients upon Franklin’s request, which will be used for the dish he’ll be making.

It will do you some good to help him out, too. After all, successfully assisting Franklin during his time of need will most likely earn you some cool rewards, as this is the case for other NPCs that visit your island during a specific holiday or event.

On the other hand, the second visitor is named Jingle, who is a black-nosed reindeer who will show up on your island on Toy Day or Christmas Eve. As you can imagine, Jingle will be asking festive requests from New Horizons players.

After you talk to Jingle, you will be tasked to carry around a sack of gifts around your island as you give them out to the different residents. In other words, you’re basically going to act as the Santa Claus on your island.

It looks like a pretty interesting activity to do during the holiday season, especially when you’re on vacation and have nothing else to do. Besides, just like Franklin, Jingle will also offer some neat rewards after you help him.

Among other things, the new Winter Update will also be bringing other new features to the table, such as new hairstyles and reactions. In addition to that, players will finally be able to expand their in-game house’s storage space.

Players will also be able to transfer saved data, which is something that many fans have been asking for since the game’s initial launch. Last but not least, fans can look forward to a brand-new free update some time in late January, according to the trailer. That being said, there’s a bunch of stuff you can do until then.

Sky: Children of the Light Gets Spring 2021 Release Date For Nintendo Switch