Castlevania Grimoire of Souls Now Available On The Apple Arcade

Castlevania: Grimoire of Souls, the newest installment in the long-running Castlevania series, was just re-released as an Apple Arcade exclusive. The title was published in Canada in 2019 but delisted in 2020, despite the fact that it was not a new episode in the series.

Grimoire of Souls is a Castlevania spin-off game that combines 2D side-scrolling action with role-playing features, including character growth and an experience-based system that allows characters to become stronger as they go.

It also includes a range of single-player and multiplayer modes, as well as playable characters from the series’ almost four-decade history. Alucard, Simon Belmont, Charlotte Aulin, Maria Renard, and other characters are among them. Each player in the game has their own set of skills, talents, and weaponry.

Castlevania: Grimoire of Souls will be exclusively re-released for iOS, iPadOS, macOS, and tvOS via Apple Arcade, according to an announcement clip posted on Konami’s official YouTube account. This free-to-play upgraded edition will have numerous new upgrades and features, such as new equipment, improved weapon, and advancement systems, newly voiced cinematic sequences, and the ability to personalize characters with new costumes, according to its listing description on Apple Arcade.

Grimoire of Souls will be re-released with a completely new soundtrack by Michiru Yamane, which players may listen to while completing the game’s 60 levels. New daily and weekly missions have also been introduced. These may be done solo, in co-op with a friend, or in multiplayer mode with up to four players. 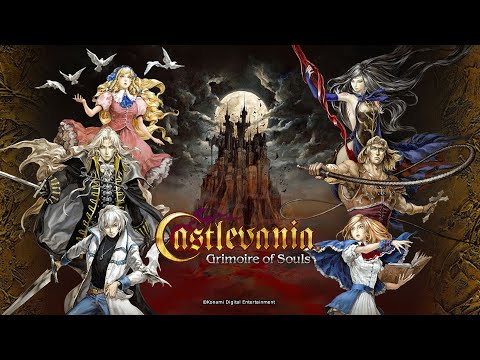 This isn’t the first time the Castlevania series has gotten some attention recently, especially with the series’ anniversary approaching. In Taiwan, The Castlevania Advance Collection was rated for PS4, Xbox One, Nintendo Switch, and PC, and it’s possible that it’s a collection of the series’ Game Boy Advance trilogy, which includes Aria of Sorrow, Circle of Moon, and Harmony of Dissonance. These games, like Grimoire of Souls, are all 2D spin-offs.

Castlevania: Grimoire of Souls may have struggled since its debut and subsequent cancellation, but its reappearance might signal a fresh start for the 2D platformer. As no further reissues or new installments have been planned, this new re-release will keep fans engaged while Konami prepares for Castlevania’s 35th anniversary.