Disney and Capcom are reportedly in negotiations to bring Marvel vs. Capcom 2 back in some form, but it’s unclear whether the many companies involved will be able to come to an agreement on how to do it. Marvel vs. Capcom 2: New Age of Heroes, released in 2000, is a 2D fighter with a large cast of gaming and comic book characters, vibrant and colorful sprite-based visuals, and fast-paced gameplay.

Despite positive reviews and a loyal fan base, the Marvel vs. Capcom series has been in legal limbo for the past few years, with the most recent installment, Marvel vs. Capcom: Infinite, released in 2017. This hasn’t stopped fans from clamoring for the crossover series to return, with hashtags like Maximillian Dodd’s #FreeMVC2 trending on Twitter.

Even big-name celebs like Michel B. Jordan (well known for his role as Erik “Killmonger” Stevens in 2018’s Black Panther) are speaking out in favor of a Marvel vs. Capcom 2 current-gen remake. It turns out that both Disney and Capcom are paying attention to these demands, however bringing MVC2 back may be more difficult than it appears.

Digital Eclipse CEO Mike Mika recently spoke with Shacknews at the GamerHubTV YouTube channel (via Game Rant) about the prospect of a new Marvel vs. Capcom 2 re-release. His business has already assisted Disney and Capcom in remastering some of their older titles for contemporary systems.

Mika stated that he supports the concept and has approached Disney and Capcom about it in the aftermath of the #FreeMVC2 campaign. After the problematic production of Marvel Vs. Capcom: Infinite, he indicated that the choice to release Marvel vs. Capcom 2 on current systems will ultimately fall to Disney, Marvel, and Capcom.

He also knocked down accusations that these parent firms had a tense working relationship. However, he pointed out that licensing fees, which Mika stated may sometimes be even higher than the game’s real budget, are a big roadblock to getting MVC2 re-released. 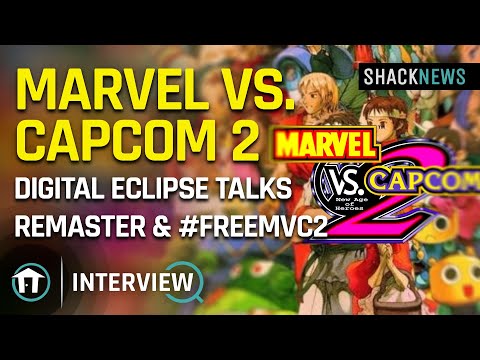 Given Marvel’s recent rise of high-quality licensed titles, this could be as good a time as any for a restored edition of Marvel Vs. Capcom 2. Marvel’s Spider-Man and Spider-Man: Miles Morales, both developed by Insomniac, have received critical praise on par with Rocksteady’s Batman: Arkham series.

Similarly, new DLC content for Crystal Dynamics’ Marvel’s The Avengers is being released. This trend isn’t likely to slow down anytime soon, with Insomniac working on Marvel’s Spider-Man 2 and Marvel’s Wolverine, and Square Enix set to release Marvel’s Guardians Of The Galaxy next month. In addition, next year, Firaxis’ Marvel’s Midnight Suns will focus on the darker, more mystical aspects of the Marvel Universe.

The possibility of transferring Marvel Vs. Capcom 2 to current consoles such as the PlayStation 5 or Xbox Series X would delight fans of the game, but the obstacles between Disney, Marvel, and Capcom might make it impossible. Even said, the fact that a Marvel Vs. Capcom 2 remake is being discussed between both firms gives gamers optimism that the iconic crossover game may return.