Tom Clancy’s The Division 2 is undeniably one of the most enjoyable co-op games around. Players will experience endless hours of ever-changing content by completing missions with teammates, competing against enemy teams, or simply chasing down all the rubber ducks.

With the upcoming Stadia release, even more players will be running and gunning in the game than ever before. Having a better piece of gear will give you an edge in raids and when bringing down enemies in Conflict Mode. The Eagle Bearer is a great gun for giving players an advantage over their opponents!

What is The Eagle Bearer?

The Eagle Bearer is a rare assault rifle that can only be obtained by Operation Dark Hours as a fall. Exotics are the most powerful weapons and equipment in the game. Exotic signifies the greatest level of rarity, implying that they all have three distinct abilities. Furthermore, they all have unique visual marks, making them all a dazzling way to dispatch foes.

Bearing gear scores in mind is one of the most important things to remember while grinding for exotics. The World Tier players have a direct impact on the exotics’ gear ranking. Players will want to work their way up to higher levels before pursuing the Eagle Bearer to maximize their attempts until it is found.

What Does The Weapon Do?

Eagle’s Strike: As players continue to fire, Eagle Bearer’s accuracy improves and can reach 100%. Players who successfully kill with a headshot gain +100% Reload Speed, +35% Damage, and the Tenacity buff for 10 seconds. Every bodyshot increases Tenacity’s power by 1%, and each headshot increases it by 5%.

Tenacity: Up to 80% of the damage dealt with players is deferred until the buff ends. When the buff is active, each enemy killed reduces delayed damage by 10%, up to 100% with five kills.

The Eagle Bearer’s advantages may allow it to be more effective at longer ranges than other weapons. In terms of range and accuracy, it can also outperform the Police M4. It’s one of only a few assault rifles with a 60-round magazine. To equal this degree of firepower, other rifles need expanded magazines.

How To Use The Gun

Managing headshot kills to improve accuracy can become a snowball effect, allowing players to keep racking up kills one after the other. It’s much better to put the eye on the trigger to keep blasting for the wider magazine!

Tenacity helps the Eagle Bearer keep players alive longer. The buff will also aid players in surviving tense firefights or being cornered. How awesome is it that the arm helps keep players safe even though they aren’t using it? Players may also “become surrounded” on purpose if they are cautious in order to take advantage of those who are shocked their trap isn’t going as planned.

How And Where To Get The Weapon

The Eagle Bearer can only be obtained by completing Operation Dark Force, the first raid ever published for Division 2. Eight-player teams must fight through Ronald Reagan Washington National Airport to defeat the final boss: a DDP-52 Razorback. It’s no small feat to achieve for four other bosses in the way. 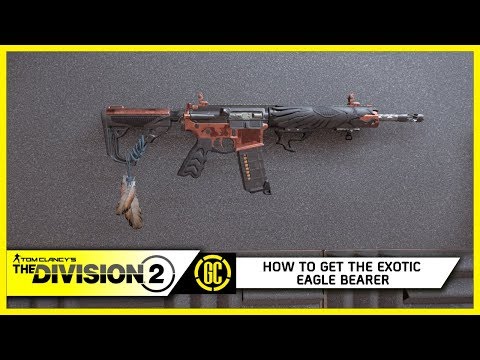 The Eagle Bearer can be obtained in two ways: as a random drop from one of the raid’s bosses or by completing the raid five times. Don’t be fooled: this isn’t a raid that can be quickly completed in order to get this rare weapon. Each boss is extremely difficult to defeat and necessitates a combination of abilities and tactics.

How To Take Down Each Boss

Going into the raid with a plan to take out each of the bosses would help players hit the five completion levels and destroy bosses that will lose the Eagle Bearer as loot. Here are few general guidelines for removing each of them.

Boomer: At the start of the battle, Max is resistant to attack, so concentrate your fire on other targets, such as the shield generator. Hold certain players on turret duty to prevent the turrets from falling. Jump off the turret and shoot the red weak spot on his back to deal rapid-fire damage. Allow him to recover, but make sure to hit the green healing points on his body as well.

Dizzy, Ricochet, and Weasel: Split into two four-person teams, ensuring that each side has the same amount of firepower and experience. Ensure the orange gas is injected into the room so that the players’ loss isn’t reduced. If it’s true, defeating Dizzy and Ricochet at the same time would make the battle against Weasel much easier.

Buddy & Lucy: Due to Buddy’s ability to recover himself, extra players should be focused on him to keep damage levels up. To stop the Overcharge mechanic, keep Lucy and Buddy’s health bars close to the same level. Nobody needs to see two managers regaining their fitness. Keep an eye out for Lucy’s one-hit-kill assault and take cover as soon as it starts.

Razorback DDP-52: Ensure that every player with the EMP Pulse ability has it fitted, as it can aid in the deployment of drones during the war. Using the Survivalist’s Crossbow’s benefit of being able to knock out vent panels in one shot. Keep an eye out for the elite heavy minigunners and eliminate them as soon as possible; no one wants their whole squad to be wiped out by a missile attack. To stop another entire squad scrub, remember to wipe out the panels those minigunners attempted to unlock in the proper order as soon as possible.

The Eagle Bearer will be the proud owner of the players who handle this five times or are fortunate with their loot. The raid isn’t for the faint of heart, but players who work well together and learn the ropes won’t be disappointed to have this versatile tool in their arsenal.