Gamers who are looking to secure a PlayStation 5 hassle-free can do so by competing and winning the upcoming Fortnite Generations Cup, a tournament exclusively available for console players. While trying to get a PlayStation 5 from retail websites may not prove to be successful, the top players from across the globe will be able to earn one upfront by bringing their A-game to the upcoming tournament.

The PlayStation 5 released last November 12 as Sony’s fifth and latest console. Alongside the Xbox Series X|S, which released a few days earlier, consumers have had a hard time getting their hands on the new systems because of retail site crashes, limited stocks and production, and a seemingly never-ending battle with scalpers and bots.

As with any new console, the $400-$500 price of the PlayStation 5 is also surely a factor that keeps many sticking to the older hardware. While Fortnite’s updated visuals look breathtaking on the PlayStation 5, it is an experience enjoyed by relatively few so far.

Now, developer Epic Games is giving PlayStation owners a chance to get their hands on a PlayStation 5 by proving they are the most worthy Fortnite player in their region. Fortnite’s development team revealed the Generations Cup, which is exclusive to PlayStation 4 and PlayStation 5 owners.

The solo tournament is set to start on December 18, and the top-placing player for every region will earn a free PlayStation 5, while all top players will get a free Kama Back Bling and Kuno Outfit. The tournament will be available in eight regions including the Middle East, Asia, Oceania, Europe, Brazil, and North America East.

While there will only be eight free PlayStation 5 consoles awarded during the entire tournament, thousands of players will get the Indigo Kuno cosmetic set. This exclusive back bling and skin will be given to 6000 top placing teams around the world. 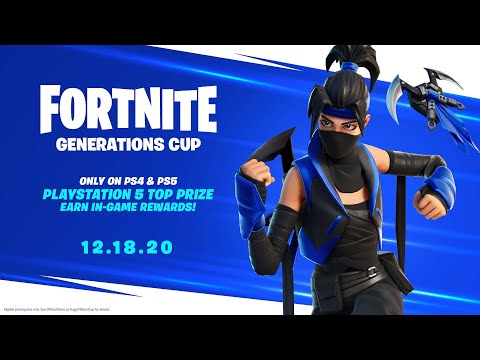 Identical to the Tart Tycoon skin given to those who participated in the #FreeFortnite tournament, players won’t be able to get this skin outside of the tournament making it even more enticing to compete for. However, Epic Games is infamous for backing out of its exclusive skin pledges, so winners will have to wait and check if these freebies remain locked behind skill and not V-Bucks.

Limited edition skins are great but a free PlayStation 5 is certainly much better. While other Fortnite tournaments have rewarded top players with large amounts of money, the best Fortnite players on the PlayStation can get a PlayStation 5 for free by proving they are the best in the world.