Riot Games released a new League of Legends trailer recently showcasing the new Shan Hai Scroll skins. This most recent skin set was released last week on January 28 in anticipation of this year’s Lunar New Year, which will begin on February 12. Releasing a new skin set for Lunar New Year is an annual tradition of Riot Games’, and it’s great that it’s still ongoing even today.

Although the developer releases these skins for its massive Chinese players, fans from all over the world can also purchase these themed cosmetics and take part in the Lunar New Year event. For 2020’s Year of the Rat Lunar New Year event, developer Riot Games released its five Mecha Kingdoms skins as well as one Prestige edition skin.

Since we’re already in 2021, Riot Games’ auto battler game, Teamfight Tactics, recently released its Lunar New Year skins with the Festival of Beasts. This event added brand-new units to the game, all of which were based on the Shan Hai Scroll skins. Not only that, it included other cosmetics as well as arenas themed around this year’s Lunar New Year.

2021 is the Year of the Ox, so fans were intrigued to see what Riot Games had planned in celebration of the yearly event. Thanks to the recent cinematic trailer, we now have a good idea of what to expect from the Shan Hai Scroll skins. 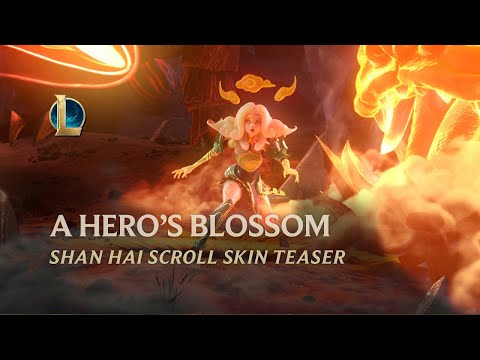 There are four different champions featured in this trailer, which was posted on the official League of Legends YouTube channel. These four champions will be the one to receive Shan Hai Scroll skins, namely Nautilus, Cho’Gath, Jhin, and Neeko. In the “A Hero’s Blossom” trailer, we can see Neeko trying to fight off two Shan Hai Scroll giants, namely Cho’Gath and Nautilus.

The latter two are trying to attack Neeko while avoiding damage inflicted from Jhin’s gun. Not only is the cinematic trailer action-packed, but it also does a commendable job at showcasing how each of the skins look—all of which are inspired from Chinese fairy tales and mythology.

Asides from the skins themselves, though, the trailer also highlights some of the skins’ details, which is something that’s not often showcased. For instance, the trailer puts a spotlight on the fact that there’s a difference in Jhin’s iconic mask in that it’s a bit more demonic to match the overall theme.

Then, there’s Nautilus’s ultimate ability, which looks like it spits out a ghost-like image of some kind of mythical Chinese beast. Overall, this latest League of Legends trailer definitely didn’t disappoint, just like the others.

Riot Games’ cinematic trailers are known for high production value and level of detail—something that countless fans love and appreciate. In this case, Riot Games was able to beautifully blend together a mix of traditional and mythical, and created a skin set (and a trailer) that was able to fully capture the uniqueness of League of Legends.

“A Hero’s Blossom” is simply one of the trailers in Riot’s roster of incredible videos, and we’re sure that it did a great job at hyping up the fans for the new skins.