A new and terrifying teaser featuring Giancarlo Esposito has been released in preparation for the release of Far Cry 6. The Far Cry series is notorious for portraying deceptively charming villains, and Esposito’s Antón Castillo seems to be no different.

In the months leading up to its October release, Ubisoft has been slowly disclosing more details about Far Cry 6. Several Far Cry 6 previews have also been revealed, along with additional pieces of information. So far, the game looks to be a normal Far Cry game, with the Caribbean islands of Yara serving as a fresh setting for some very similar gameplay.

However, it remains to be seen whether the previews accurately represent the full final product. Antón Castillo, the cruel Yaran dictator and the game’s main adversary is one feature of Far Cry 6 that has already piqued fans’ interest.

Several Far Cry 6 gameplay videos have centered on this fictitious villain, but now fans can see Giancarlo Esposito, who plays Antón. The famed thespian takes on the live character of Castillo for a bone-chilling Far Cry 6 teaser in a clip published by Ubisoft.

Throughout the clip, the actor mocks the audience, which he narrates, for even thinking they could take on someone as powerful as Antón Castillo. He compares the rebels to “untamed circus animal(s),” whose methods of combat include playing with dogs (cue Far Cry 6’s cute amigo Chorizo) and improvising weapons out of rubbish.

Castillo’s dominance is subsequently reaffirmed by Esposito, who highlights the dictator’s “exquisite weapon, made from pure gold,” as well as his tank-driving, helicopter-flying Yaran army. Needless to say, this teaser is ominous, yet it’s filled with Esposito’s irresistible allure. 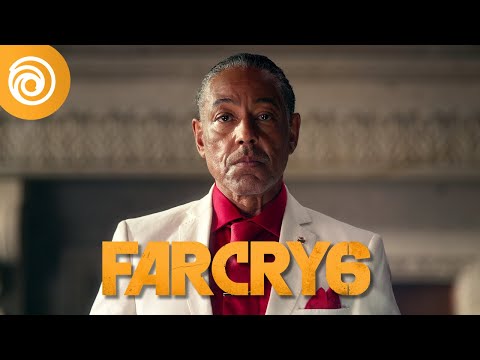 Esposito’s assertion that Antón Castillo from Far Cry 6 is his “most horrific monster yet” is undoubtedly audacious given his amazing catalog of villains. Esposito is no stranger to the bad guy role, having played Gus Fring on Breaking Bad and Moff Gideon on The Mandalorian. He has, nevertheless, managed to imbue all of his characters with a magnetic quality, no matter how dangerous or ethically dubious they may be.

If the actor’s portrayal of Castillo in the latest Far Cry 6 teaser is any indication, fans will not be disappointed. Far Cry 6’s evil character, played by Giancarlo Esposito, maybe what elevates the game above being just another predictable shoot-them-up set in a tropical setting.