Riot Games has revealed the skills of Akshan, the newest champion, to kick off its upcoming League of Legends tournament. The Sentinels of Light, League of Legends’ next major event, is just around the corner. According to legend, the Sentinels battle zombie armies from the Shadow Isles. Lucian and Senna were the only known Sentinels in-game before the incident.

League of Legends has expanded its realm beyond the MOBA game in the last year. This expansion’s first two games, Legends of Runeterra and Teamfight Tactics, are just the beginning. Riot is presently working on an MMO, a fighting game, and an animated series, with more projects in the works. Riot has also been collaborating with Marvel on canonical comic storylines to help flesh out its ever-growing roster of champions.

Akshan, The Rogue Sentinel, is the 156th champion to join the League of Legends. Riot announced his new powers on Twitter, and YouTuber Skin Spotlights has compiled all of the clips. His gear screams jungle or mid, with a lot of mobility and utility.

The first is his Dirty Fighting passive, which gives a shield after three damaging strikes, a burst of physical damage on the third hit, and movement speed if Akshan cancels the second attack following the burst. Avengerang is his Q, a skill shot boomerang that expands its range as more opponents are struck and strikes enemies again when it returns.

This assault also shows which opponents have been hit. Akshan’s E is a Heroic Swing, a hook shot like Camille’s that Akshan utilizes to swing across the map’s topography. The swing takes two casts and also forces Akshan to discharge his gun at the nearest adversary. Akshan will leap off in the direction of the cursor and fire another shot if you cast a third time.

Commeuppance is Akshan’s ultimate, which latches on to an enemy champion, minion, or structure and does damage proportional to the target’s health loss. While employing Heroic Swing, Commeuppance can be used. His W, Going Rogue, is a particularly remarkable ability.

Akshan’s passive ability allows him to resurrect allied champions who have been slain by Scoundrels, the marked foes that have murdered an ally. Killing a scoundrel also rewards you with extra cash. The amount of foes slain is displayed in bars over the heads of scoundrels. 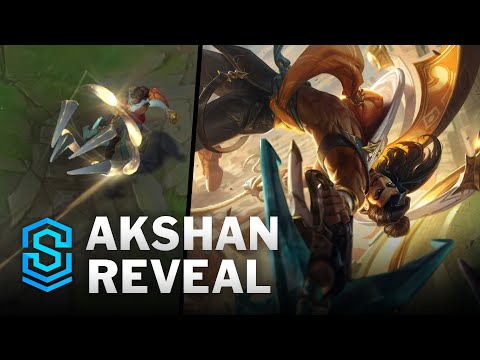 When Akshan is near terrain, the active ability of Going Rogue camouflages him for a short time or indefinitely. Upon Akshan is disguised, he can notice Scoundrel tracks and receives extra movement speed and mana regeneration when approaching them.

Going Rogue has the potential to be one of the game’s most devastating abilities. Not only does it allow Akshan to camouflage indefinitely like Evelynn, track enemies like Warwick, and gain bonus gold like Pyke, but he can also potentially revive the entire team with one kill. The rest of his kit essentially turns Akshan into a hyper-mobile burst assassin that can execute enemies, revive allies, and shred ADCs.

If Akshan releases in his present form, he may be barred from professional play. This would be a shame, as he looks like a fun character, and his high mobility should make him quite enjoyable to play. Riot needs to be careful with his stats if it wants to keep him balanced. Fans will be able to see if they succeed on July 22nd.

Fra Cry Beyond The Board Game Releasing Next Year