Overwatch 2 Will Have Passive Role Abilities

Blizzard first announced Overwatch 2 back in 2019, and fans have been looking forward to its release since then—or at the very least, some kind of development update. Progress updates have been scarce for the past few years, but finally, Blizzard revealed everything they were ready to share during this year’s BlizzCon Online event.

The event took place digitally, so Jeff Kaplan and other developers had a video call with each other to share important details about Overwatch 2 and what fans can expect from it. They also revealed the different maps, new upgrades, and many other things they’ve worked hard on all these years.

Important announcements regarding Overwatch 2’s PvE and PvP have been made as well. One feature worth mentioning is that apparently, the upcoming game will have ‘hundreds’ of hero missions. This is undoubtedly an incredible feat. The missions offer dynamic weather conditions, among other elements, which allow players to have fresh and exciting missions every time without it getting boring.

Those who have been fans of Overwatch for a long time now know just how important the heroes’ abilities are when it comes to balancing and gameplay. Every hero is unique; each one has a variety of abilities that require different cooldown times, along with useful Ultimate abilities and passive abilities. The latter tirelessly works in the background, assisting the player character as they try to win the match.

For instance, the hero Mercy has a regeneration passive ability, which allows her to heal herself. With enough time, she could bring her health back to a hundred. Other characters also have passive abilities; Zarya is able to charge her particle cannon every time she blocks using her bubbles, while Sombra has the passive ability to see which enemies have low health—even through walls.

In the case of the first Overwatch game, passive abilities have been more or less hero-specific. However, it appears that this is no longer the case with Overwatch 2. For this highly awaited sequel, heroes will be able to receive passive abilities depending on their role.

Blizzard is still experimenting with this concept, so it’s still not a guarantee that passive role abilities will go live as soon as Overwatch 2 launches. 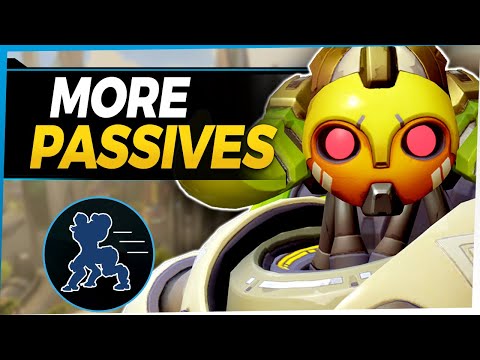 In Overwatch 2, Tank heroes may have a boosted knockback resistance, and players may not receive as much Ultimate charge when they shoot this type of role. For Damage type heroes, the developer may be increasing their movement speed so that they can move around more dynamically than ever before.

On the other hand, Support roles may have a similar passive to Mercy wherein they can regenerate their health. However, it may be at a slower rate than Mercy’s passive. Heroes will still have their individual passive abilities, so the new passive roles may be available on top of that.

Asides from these changes, Blizzard revealed that it’s also revamping the Tank role so that they can become “more toe-to-toe brawlers and less characters that just stand back and protect other players.” Again, it’s worth remembering that these changes and adjustments are still in their developmental and experimental phase.

As such, they may not be readily available when Overwatch 2 goes live. Still, it’s great knowing that these changes may be implemented at some point, and it just goes to show that Blizzard has been hard at work trying to make Overwatch an even better franchise.

Sales Are to the Moon for Bored Ape, Mutant Ape Yacht Club NFTs