Rune 2: Decapitation Edition Makes Its Way To Steam This November 13

Rune 2: Decapitation Edition was initially released exclusively on the Epic Games Store, however, developer Studio 369 will be bringing the game to another popular storefront, namely Steam.

The game was launched about a year ago in November 2019, and now that it’s coming to Steam, more players will be able to experience this open-world action RPG. This Steam version of the game follows the original Rune 2 title, only this time, it’s a new and improved edition.

Studio 369 picked up where the old developers left off, and this time around, Rune 2 is a “re-envisioned story of betrayal, rebirth and revenge.” There’s a bunch of new and exciting features introduced in this version, such as the addition of more quests, new characters, as well as a different ending.

In this game, Midgard is in disarray and it’s all because of Loki. As the chosen warrior, it’s your duty to end Ragnarok. You will set out on a dangerous journey where you will encounter a variety of enemies, such as hordes of minions who will do everything in their power to eliminate you. 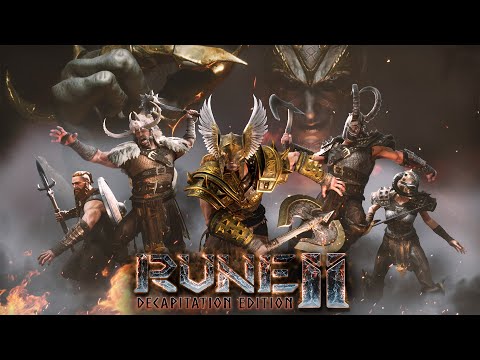 You don’t have to battle alone though. Rune 2: Decapitation Edition gives you the option to team up with up to four players, as you fight savage creatures and giant monsters. As a team, you will be able to battle Loki together, but only if you survive long enough to reach the end of your journey.

In order to obtain one-of-a-kind abilities and skills, the different warriors will align with Norse gods. With each chosen god, there will be 20 new abilities that center around them, such as the ability to cast powerful lightning bolts or summon pets to aid you during combat.

As you progress through the game, you will be able to gather and make use of divine artifacts, rare resources, and so much more. These will be needed in order to create the sword that was initially crafted by Loki himself – and this will be the same sword needed in order to defeat him.

Among other things, Rune 2: Decapitation Edition has new gameplay mechanics that weren’t available in previous versions, such as upgraded combat mechanics, a skill tree system, as well as a new and improved quest system.

You can’t simply rush into battle if you want to win the game though. Mastering the game’s mechanics and strategizing are two vital factors if you want to lead your warrior to victory. Besides, you get to utilize new finishing moves, parrying techniques, as well as combo attacks in this version.

Another important aspect of Rune 2 deals with rebuilding and revitalizing the land. As such, you have to gather all kinds of resources you can find along your journey in order to restore Midgard to the glorious place it once was. This includes building forges and longhouses, among others.

After all, it’s vital to have well-armed villagers in case of a horde attack. Ensuring that your village is well-prepared is an important factor in survival. After you successfully finish Rune 2’s main campaign, you can participate in online PvP challenges to try and see who the strongest warrior is in Midgard.

Rune 2: Decapitation Edition will be available on Steam this November 13.