The most recent Stuff Pack for The Sims 4 has been officially revealed, and this time around, it revolves around spooky and paranormal content. Since the fourth entry in the Sims franchise was released back in September 2014, there’s been a plethora of new content added to the life simulation video game, which are available in different sizes and prices.

Among all the premium DLCs, the cheapest out of all the options is the Stuff Packs. These packs usually include new places for your Sims character to sit down on, new clothing options, and sometimes even new gameplay features. There’s about eighteen Stuff Packs overall, which is already a subset out of the thirty-seven packs you can download for The Sims 4. As time passed, the different types of packs have also become more detailed and complex.

As mentioned, the most recent Stuff Pack for the game is all about the paranormal, but this actually isn’t the first time that The Sims 4 dipped its toes into the world of the supernatural. Specifically, the game’s fourth game pack gave your Sims the chance to meet or become vampires. It even added new, darker clothes to fit the lifestyle, as well as ambitions that highlight blood sucking. 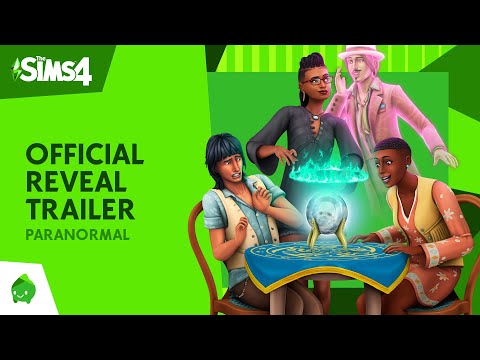 The Sims 4 also introduced a Spooky Stuff Pack in 2015, which had spider web decorations, Halloween costumes for your characters, and it even allowed your Sim to host a party to celebrate the spooky occasion. Now, The Sims 4 players who enjoy the darker side of things will have yet another pack to enjoy.

Electronic Arts recently dropped a reveal trailer for the Paranormal Stuff Pack, which is scheduled to launch on January 26, 2021. That being said, fans actually voted for the addition of this pack during the community stuff pack vote, making it the second one after Nifty Knitting Stuff.

There’s a bunch of exciting new content that this pack will bring to the table. For one thing, you will be able to build haunted houses as well as become a medium and commune with the spirit world.

You even have the chance to become a licensed paranormal investigator, and the process is fairly simple. All you have to do is clear out your own home of any unwanted spirits or ghouls and impress the new spectral assistant Guidry for this interesting opportunity. If you succeed in becoming a paranormal investigator, you can take on jobs where you have to cleanse other Sims’ haunted houses.

Asides from these additions though, there’s more to the Paranormal Stuff Pack than meets the eye. According to the official The Sims 4 website, some of the key features of this upcoming pack include the ability to perform seances and talk to the dead. Not only that, the trailer showcases a bunch of new furniture as well, perfect for those who want to completely embrace the Ghostbuster lifestyle and adorn their homes with paranormal-themed items.

The Paranormal Stuff Pack also gives you the chance to meet with the fan-favorite skeletal maid, Bonehilda. The NPC has been around since the first The Sims game, which makes her a very familiar entity to many long-time fans.

Princess Connect! Re: Dive Is Finally Getting A Global Release