As with every new generation of Pokemon games, Pokemon Sword & Shield introduced a bunch of new monsters found in the Galar region for players to catch and train. And although Gen 7 didn’t introduce new fossil Pokemon for unknown reasons, Gen 8 both added new fossil Pokemon and gave fans an intriguing twist on the concept, allowing players to mix and match fossils to make 4 unique Pokemon – Arctovish, Dracovish, Arctozolt, and Dracozolt.

Another surprise the developers gave fans this year was a new take on the anime, with Pokemon Journeys having Ash and his friends wander to various regions from episode to episode as opposed to wasting the whole season in the newest region.

This has allowed Ash to assemble quite an impressive team of Pokemon so far, and now with the anime’s 50th episode recently airing in Japan, Pokemon Journeys has given Ash his 5th new Pokemon, the Galar fossil Pokemon Dracovish.

In the latest episode of Pokemon Journeys called “Galar Fossils! Stick ‘Em Together!,” Ash and his friends visit the Galar region again, where they meet two researchers, including Cara Liss, who shows up as a clumsy scientist in Pokemon Sword and Shield.

Pandemonium happens when the group starts to combine fossils, and while Ash’s partner Goh catches a Boldore, the pair are given their own fossil Pokemon, with Goh getting an Arctozolt while Ash notably getting a Dracovish.

While Ash was anticipated to acquire at least one more Pokemon in the anime to gain a complete team, Dracovish is a significant addition for various reasons. Dracovish marks the first fossil Pokemon Ash has officially obtained, and the new Pokemon is also Ash’s first Pokemon originally found in the Galar region, not considering his Galarian Farfetch’d. 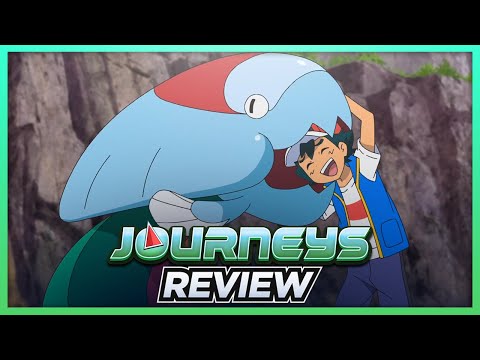 On Twitter, user ThePokeRaf pointed out that Ash getting a Dracovish has marked the longest gap between the beginning of a new series of the Pokemon anime and Ash acquiring a Pokemon from the latest generation as well. In addition, it just so occurs that Dracovish is one of the most popular and most powerful Pokemon in the competitive side of Pokemon Sword and Shield.

The Dragon and Water-type Pokemon has a lot of factors that make it in the current meta such as it is only weak to Fairy and Dragon-type attacks while resistant to many others. In addition, the Pokemon’s Strong Jaw ability powers up bite attacks such as Crunch as well as its signature move, Fishous Rend which also doubles its power when Dracovish moves before its enemies.