While many Call of Duty fans are aware of the fact that this destination is home to a multi-million dollar house—of course, its exterior and interior speak for itself—not as many realize just how weird this expensive building truly is.

Numerous Call of Duty fans enjoy playing in the Raid map, so much so that many consider it to be one of the best multiplayer maps in the game. However, there’s one player in particular who took a step back and looked at the building in a different light. Most of the time, gamers don’t really think much about maps, other than the fact that they’re just arenas where they can do battle.

However, these sites are mostly based on real-world locations, so it’s also strange how no one questioned the Raid map until now. The Call of Duty fan, who goes by Replay Mode on YouTube, posted an amusing video about the map and sheds light on why it makes no sense.

Although, Replay Mode is no stranger to posting videos with similar content to this, as he usually posts videos on Call of Duty glitches, tours of other popular in-game map locations, as well as amusing player names. This video, in particular, is entitled “An Accurate Tour of Raid,” and he details several odd aspects about the map that many players may have never considered before. 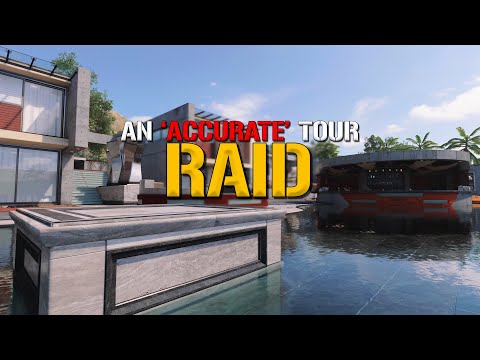 For instance, there’s a portion in the video where Replay Mode mentions the bedroom and how it has a window with a great outside view of the pool. However, this room is not connected to the rest of the house at all. Not only that, people who reside in that luxurious house would have to travel across the outside area first if they want to relax and eat dinner inside the house after cooking their meals in the kitchen.

Now, probably the biggest flaw in the map Raid is the house’s panic room. Amusingly enough, this supposed panic room has a massive window, which defeats the purpose of a panic room to begin with. Whatever you want to hide from by locking yourself inside that panic room will be able to reach you through that window.

While it’s great that the developer replicated the original Raid map to the best of its abilities all while adding improvements, it can’t be denied that this massive house isn’t perfect. Of course, Replay Mode wasn’t trying to trash a fan-favorite map—the YouTuber was just trying to apply a light-hearted and realistic interpretation of the map and its features.

While the Raid map is a great site for you and other players to fight one another in, it’s not that practical as a home. This isn’t the first time that a player noticed inaccuracies in Call of Duty: Black Ops Cold War, though. In fact, many fans have noticed tons of them at this point. Of course, these don’t take away the game’s playability, but observant players do get a laugh out of them.