Some of you may have dreamed of creating your very own Jurassic World as a kid. Well, it’s certainly possible to make your dreams come true now! Jurassic World Evolution: Complete Edition was recently announced during Gamescom’s 2020 event.

Jurassic World Evolution is based on the 2015 movie Jurassic World, and you have to manage your own theme park that’s brimming with dinosaurs. Think you can handle it? Thankfully, Dr. Ian Malcolm – played by Jeff Goldblum in the franchise – will be assisting you as you create your park throughout the island. 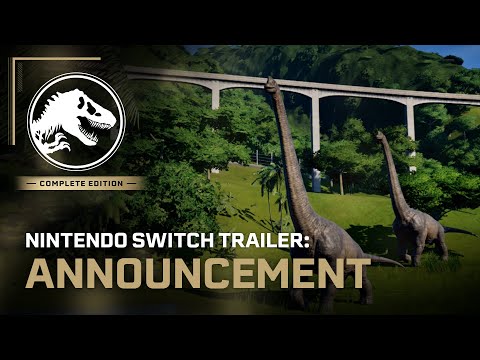 What makes this edition different from the other Jurassic World Evolution games is that it includes all DLC and updates that have been released since the game’s launch in 2018. These will include:

Immerse yourself in every aspect of your very own Jurassic World as you take control of operations on the legendary Isla Nublar and the surrounding islands of the Muertes Archipelago. With the fate of the park at your fingertips, you can construct attractions, as well as containment and research facilities as you bioengineer new dinosaur species that think, feel and intelligently react to their environments.”

“With multiple ways to play, you can choose whether to control the big picture with deep, accessible management options or go hands-on to confront challenges on the ground or in the air in action-based gameplay. Every choice leads to a different path and spectacular challenges arise when ‘life finds a way.'”

Jurassic World Evolution: Complete Edition will be available for the Nintendo Switch on November 03, 2020. That said, you can either add it on your wishlist today or pre-purchase it for $59.99 on the eShop.