A brand-new gameplay trailer for Crimson Desert was debuted during The Game Awards 2020, which is a title developed by Pearl Abyss — the same creators of the MMORPG Black Desert. It was one of the games that were showcased during this year’s digital event.

There’s a lot to unpack in this 5-minute gameplay trailer. On the get-go, we already have an insight into Crimson Desert’s possible plot, its gameplay mechanics, as well as a glimpse of what makes it a unique open-world action-adventure experience.

As mentioned, many gamers may be familiar with developer Pearl Abyss for Black Desert Online, a relatively popular MMORPG that has been around since 2014. Since its release, the online title was able to amass more than 40 million players throughout different platforms, namely PC, console, and mobile. Not only that, but it has also grossed over $2 billion dollars in profit.

With that in mind, it looks like Crimson Desert aims to follow in Black Desert’s footsteps towards success, as the upcoming game seems like it will have a similar story and action. The only difference is that Crimson Desert will provide players with a brand-new experience and a new world to explore. 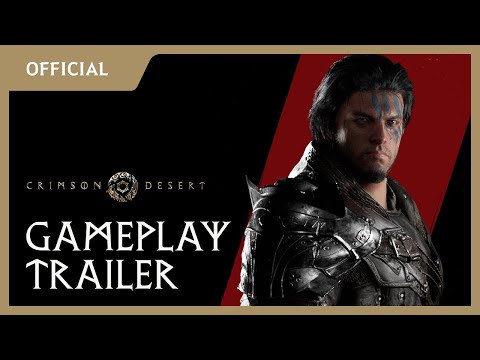 Not only did the new gameplay trailer highlight Crimson Desert’s beautiful graphics, but it also hinted at what the game’s storyline could be while putting a spotlight on its combat and gameplay elements.

Crimson Desert’s main protagonist is named Macduff, and he’s a mercenary who’s on a mission to take back his people’s land while fighting against enemies who took it in the first place. There are clips in the trailer wherein Macduff is interacting with the other mercenaries, who we assume will become vital characters in the game’s storyline.

After all, the game’s world is expansive and it has the potential to bring about many adventures to be undertaken and stories to be told. As the trailer continues, we see more of Crimson Desert’s combat. There are so many possibilities in terms of combat, and the trailer gives us a quick glimpse of that — from incredibly powerful enemy creatures to large-scale battles.

That being said, Crimson Desert sets itself apart from Black Desert by implementing a singleplayer mode. At the same time, however, it still utilizes the typical MMORPG structure that many of us are familiar with.

With that in mind, Pearl Abyss’ upcoming title isn’t the first game to seamlessly blend a single-player campaign together with online multiplayer elements. However, the gameplay trailer looks incredible and we can’t even begin to imagine the kind of adventures and mischief a player can get into as they further explore the world of Pywel.

Pearl Abyss hasn’t revealed a release date just yet, but the previously revealed release window states that the game is set to launch at some point in Winter 2021. In any case, the developer itself confirmed that it will be revealing more details about Crimson Desert as time goes on, possibly to keep both old and new fans updated on the game’s development.

Hopefully, a more specific release date will be announced soon, but for now, interested players can look through the new footage found in the gameplay trailer.