Swords are returning to Destiny 2, based on the footage shown during the gameplay reveal as well as recordings by the event’s attendees. There are several new types of swords, as well as unique animations either for the sword you carry or for the class you play. 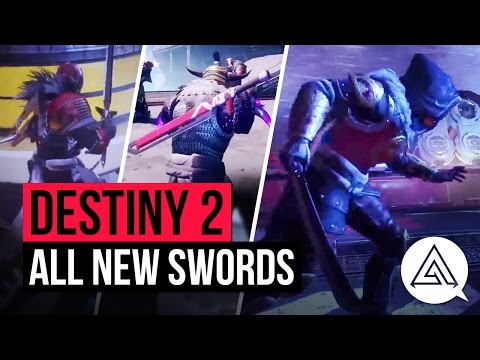 Swords were originally introduced into Bungie’s first Destiny title through The Taken King expansion and are receiving revamps in the sequel. As stated earlier, swords no longer share the same animation on your character. From the early playtests at the gameplay event, Destiny 2 features new animations based on either your class or the type of sword you hold.

That said, basing the animations and poses by class provides more identity and character, instead of shared animations based on sword-type.

The sword seen on the back of the new Titan Sentinel could be a Fallen-styled blade because of the angular design and scrap metal used. However, the weapon looks similar to the Cabal swords shown in various trailers and Destiny 2 centers on the Cabal as the main enemy.

From official gameplay footage, the Hunter class wielded a katana-style sword. The class may hold swords with only one hand and more loosely than other classes.

A broadsword was confirmed through early playtests, wielded by the Titan Striker. From the video above, you can see the broadsword help in a much stronger position. When you attack, your character will use both hands to complete the swing.

If you pre-order the Digital Deluxe, Limited Edition, or Collector’s Edition of Destiny 2 you’ll be rewarded with a legendary sword. At the moment, there is no name attached, but it looks more regal than any of the others depicted.

If you’ve played the original Destiny, you’ll notice that the sword shown above is definitely Raze-Lighter. This does not confirm the sword’s availability for players, though you may be able to earn this weapon after a quest or use it to complete one.

Unfortunately, swords were not available for the Warlock class during Destiny 2’s playtests. We’ve seen Warlocks hold a sword for their new Super, Dawnblade, but there’s no guarantee the posture and animations would be similar with a different sword-type.

You can check out all the confirmed exotic weapons and submachine guns here.

Destiny 2 is available for the PlayStation 4 and Xbox One on September 8, while PC has an unconfirmed release date after consoles.

Best Cross Platform Games You Can Play This 2021

How to run Solar Smash on PC