The conclusion of Fortnite Chapter 2 Season 4 is just a few days away, and the skin for this season’s main antagonist, Galactus, has been leaked ahead of the Nexus War event. Fortnite’s fourth season has witnessed the coming of a remarkable amount of Marvel heroes and villains who are joining in the battle against Galactus to save all of mankind. However, this recent leak has unveiled that players will be able to actually take on the role of Galactus, the Devourer of Worlds, himself.

The game’s fourth season is the first to be entirely themed after another franchise, setting the whole thing within a now canonized Marvel Comics crossover event. The arrival of Thor was teased during the last weeks of the third season, and the god of thunder arrived on The Island at the start of Season 4.

Learning of the imminent doom that that awaited the Fortnite world, Thor summoned a battalion of Marvel’s most powerful heroes such as She-Hulk, Wolverine, and Iron Man. While the villain Galactus was also teased during the end of the third season, he was not a part of the Battle Pass Nonetheless, the superheroes who arrived this season on Fortnite have spent the past several months preparing for the fight against Galactus.

Early look at Galactus' character (currently TBD, might only be for the event!) pic.twitter.com/leXPcuQy4Z

With only a couple of days before the Nexus War begins, ximton leaked on his Twitter account photos of what appears to be a Galactus skin. Ximton mentioned that while this is absolutely Galactus’ character model, it may specifically only be for the event.

This means players may have the chance to take on the role of Galactus during the Nexus War or that Galactus will be appearing utilizing this model. However, it has not been confirmed whether players will be able to buy or acquire this skin to use during the regular matches.

This would not be the first time Fortnite gave players access to skins of end of the season characters. Mecha Team Leader, who battled in the war against the colossal Cattus back in Chapter 1 Season 9, has been made available in the in-game shop a couple of times. 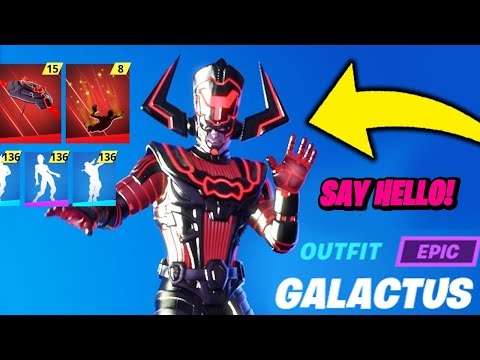 Travis Scott’s avatar that was featured during his live concert is the same model used for the skin that players can buy and there are also several skins that are irregular in size that can be usable for players who want a bigger hitbox or like a challenge while aiming down sights.

It would be a huge waste of opportunity for Epic Games not to give players the chance to play as Galactus. A lot of Marvel and Fortnite fans have admitted that they are interested in a Galactus skin even if it will be obtainable via the in-game shop. However, if the developers decide to run a time-limited mode as it did with Thanos and the Infinity Gauntlet, that would be too bad either.