Earlier this morning, a wave of leaks about a Street Fighter and Fortnite crossover emerged on the internet. The collaboration between Capcom and Epic Games would lead to skins for both Chun-Li and Ryu, as well as various Street Fighter-related emotes and cosmetics. Now, more considerable evidence of the upcoming Street Fighter crossover has been leaked. A short clip featuring Chun-Li and Ryu, including a funny bit of in-universe Fortnite narration, was shared on Twitter.

The trailer showcases a Street Fighter 2 arcade cabinet within a bigger arcade. As the clip starts, a match between Chun-Li and Ryu begins on the Street Fighter 2 arcade cabinet. It showcases the classic match soundtrack and announcer from the classic arcade title, making the trailer rich with nostalgia. As the fight begins, Agent Jonesy shows up as a pixel-art figure. He then turns on a teleportation bubble, in which Chun-Li and Ryu transform into their Fortnite-themed versions of themselves.

What the trailer means is that, similar to X-men and many other crossover collaborations before, Street Fighter characters are arriving to Fortnite. It’s not just a forthright skin release. Epic Game’s developing the crossover into its lore so that the upcoming Street Fighter heroes will make sense in the game’s universe. Whether this means there will be a following series of Fortnite tasks or other unlockables remains to be seen.

There is a confirmed product of the crossover, of course. Both Chun-Li and Ryu skins have been leaked for the game already. They might be bundled with specific Street Fighter emotes, such as Ryu’s Shoryuken and Chun-Li’s Lightning Kick. 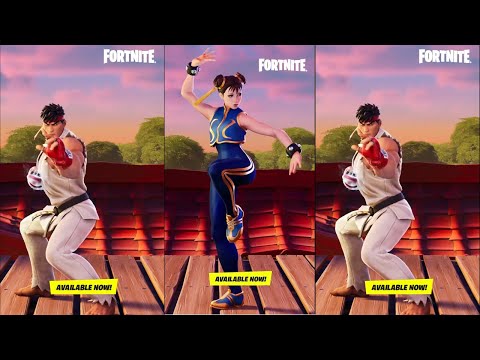 There are also datamined files that imply that the Suzaku Castle from Street Fighter might be utilized as a Skirmish Portal in the future. As of writing, Epic Games has already confirmed that Street Fighter content will truly be arriving in Fortnite.

While only Chun-Li and Ryu have been confirmed for the game at this point, players are already guessing about other Street Fighter characters arriving down the line. What’s a Ryu addition without Ken or Akuma, after all? There is no such proof of other Street Fighter coming to Fortnite just yet, but it shouldn’t take too long to introduce a Ken variation for the Ryu skin at the very least.

Enhanced Editions of BloodRayne 1 and 2: Terminal Cut Are Coming to PC