Many fans were surprised to see that the features did not end there, as the game would also have a slew of new guest characters. Morgana from Persona 5 was just confirmed to be heading to Banana Mania at Gamescom 2021.

Sega published a new teaser for Super Monkey Ball: Banana Mania earlier today, announcing that Hello Kitty will be “joining the gang.” Apart from the original Super Monkey Ball cast, Hello Kitty will appear in Banana Mania with characters such as Sonic and Tails from Sonic the Hedgehog and Beat from Jet Set Radio, who will be accessible as selectable characters from the start. Unlike them, though, Hello Kitty is a DLC character, similar to Morgana, and will be available for purchase on October 5 for $4.99.

The brief 30-second teaser gives gamers a good idea of what to anticipate when they play as Hello Kitty. The creators gave Hello Kitty a traditional appearance with her simple blue overalls, yellow long-sleeve blouse, and red bow, and she fits right in with the rest of the group.

Hello Kitty emotes while rolling, scrunching her eyes when things become too fast, and dancing after reaching the goal post, just like the classic incarnations of Sonic and Tails in Banana Mania. It’s a character that many people are unlikely to have expected to see in the game, but it’s still a nice addition. 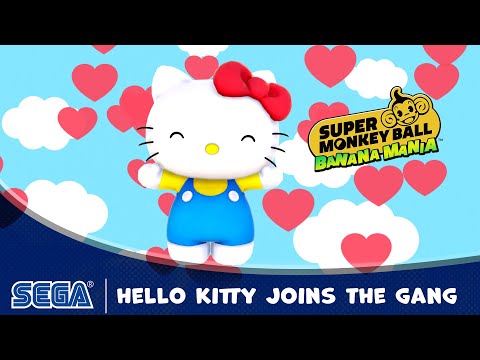 Sega is in an unusual situation with Super Monkey Ball now that Hello Kitty has been added to the game, after a litany of previous guest character announcements. While the games are specialized in and of themselves, the addition of characters from other series will naturally entice others to try them out.

Sega is currently working inside the confines of its own properties—Sonic the Hedgehog, Yakuza, and Persona—but imagine if the firm began collaborating with other studios and introducing outside characters. Banana Mania may become the Smash Ultimate of ball rolling games in no time.

Next-Gen Console Chip Shortage To Last Until Next Year