Even though Nintendo has teased us with so much Hyrule Warriors: Age of Calamity content already, it appears that the company has more surprises up its sleeve. Earlier today, Nintendo announced a surprise Nintendo Direct Mini, which showcased titles from its third-party partners.

One of the games talked about in the Direct Mini was Hyrule Warriors: Age of Calamity, and thanks to this, we now have more details about what to expect when the title gets released next month.

However, it appears that this won’t be the case for Hyrule Warriors: Age of Calamity, as the Divine Beasts appear to be giant weapons of mass destruction. 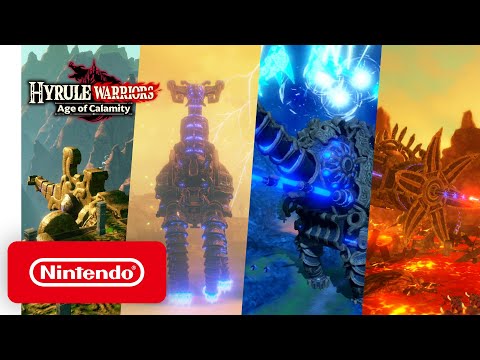 From what we can infer from the trailer, the Divine Beasts take part in eliminating Ganon’s forces. What’s more, the trailer shows us a point of view that clearly indicates that players can even control them.

In other words, it’s safe to say that the Divine Beasts can be considered as playable characters as well, since players can control and use them to fight against the enemies. Hyrule Warriors’ musou-type gameplay may not be for everyone, but you have to admit that being able to fight as a Divine Beast is pretty awesome.

Fans have been looking forward to Age of Calamity’s release since it was originally announced for numerous reasons, and this new revelation is the cherry on top. In addition to that, it appears that each Divine Beast is unique and plays differently.

Vah Medoh has the ability to fly above the battlefield and shower lasers upon the different enemies; Vah Naboris is capable of plowing through a protected gate; Vah Ruta releases homing icicles as well as a deluge of water; and lastly, Vah Rudania can crush foes with its fiery appendage.

Players have been hoping for Hyrule Warriors: Age of Calamity to have an expansive roster of playable characters, but they surely didn’t expect the Divine Beasts to be a part of this.

That being said, we still don’t know the context to which these Beasts can be used. For one thing, they could only be some kind of special attacks, or perhaps a different, more superior form of the Four Champions.

There’s also a chance that their availability depends on special battlefield conditions. No matter the case, the addition of the Divine Beasts as characters you can control is easily one of the factors why Age of Calamity is expected to be bigger than Breath of the Wild.

Those who can’t wait to try out this upcoming Hyrule Warriors sequel will be happy to know that a demo version of the title has been revealed along with the Nintendo Direct Mini. It’s currently available to download on the Nintendo Switch eShop.

What Are the Chances of Danganronpa 4? Here’s What We Know