At this point, long-time PC gamers are more than aware that whenever a new major game makes its way to the platform, there’s always the question of whether their PC will be able to handle it or not. As such, developers always release the PC requirements of the game beforehand so that players can prepare themselves.

This time around, Ubisoft has finally revealed the required specs for the upcoming game Immortals Fenyx Rising, even going so far as to provide a breakdown for each setting available.

Heavily inspired by Greek mythology, Immortals Fenyx Rising is a part of Ubisoft’s list of open-world games that come after the release of Watch Dogs: Legion and Assassin’s Creed Valhalla. Console gamers are fortunate in this department since all they have to worry about is how much space the game is going to take up on their device.

On the other hand, it’s not as simple for PC users. On the bright side though, the minimum requirements of Immortals Fenyx Rising are pretty accessible, so most players won’t have to worry about their PC not being able to play the game.

Going into specifics, Ubisoft has revealed that the game will have five different settings. The lowest settings should be able to work well enough on decent gaming computers, as it only has a 720p resolution and 30fps. As a matter of fact, this setting will even be able to run on Windows 7 computers.

In addition to that, you don’t need a lot of storage space for Immortals Fenyx Rising, as the game only requires 28GB. Although, Ubisoft recommends using an SSD for all the settings except for the lowest one, as an HDD will be sufficient enough for that one.

On the other hand, the RAM amount will require 8-16GB, although this depends on what setting you’re aiming for. Along with the PC requirements, Ubisoft has also released a brand-new video detailing the specs and features for Immortals Fenyx Rising and explaining how the company wants to provide “a fully-fledged PC experience.”

That being said, players will need high-end hardware if they wish to play the game on the highest of settings. Of course, this is to be expected already. It’s also worth noting that Immortals Fenyx Rising will have an uncapped framerate option, which means that your PC will be able to reach the highest refresh rates possible depending on the monitor used. 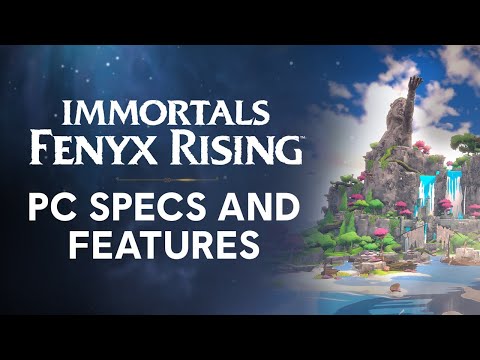 This is a feature that’s only specific to the PC, along with multi-monitor and widescreen support, a benchmark tool that’s available in-game, as well as customization options. That being said, from what we’ve seen so far, Immortals Fenyx Rising is turning out to be one of the most highly-anticipated open-world titles that are expected to be released this year.

Despite the fact that Immortals Fenyx Rising has been compared to The Legend of Zelda: Breath of the Wild just like Genshin Impact and other 2020 games, its gameplay and amusing storytelling has set it apart from the rest, making it a much-needed break from the turbulent year we have all had.