New details about Ember Lab’s upcoming adventure game, Kena: Bridge of Spirits, have been revealed today. Based on a post on Game Informer, the developers answered a lot of important questions about the upcoming game including the advantages of playing the game on the PlayStation 5, length of the game, inspiration in creating the game, and more.

As most can possibly expect, there will be major visual differences between the PlayStation 4 and PlayStation 5 versions. More effects and essential features will be shown on-screen on the next-gen version as well as forests and foliage will be thicker on the PlayStation 5. The developers also confirmed that Kena: Bridge of Spirits was built on the Unreal Engine 4. 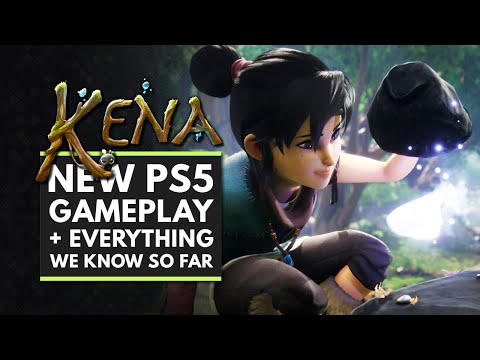 For the gameplay of Kena: Bridge of Spirits, developers described it as a wide-linear experience and not an open-world game. There will be a village that players will discover as they progress in the game which will serve as a jump-off point where they can use to explore other locations.

Combat-wise, the main character will be able to utilize light, heavy, and charged attacks using her staff which can be upgraded into a bow later in the game. The little monsters featured in the trailer are called Rot which will be encountered by Kena as she travels across the map. These creatures will have a critical role in the story and will also have a use in the gameplay as well. Kena can command the Rot to help her solve room puzzles and maneuver through impassable terrain.

– takes 2 seconds to launch from the PS5 OS (fresh launch)
– more lush and dense environments
– There are over 100 Rot (tiny creatures) in the game and PS5 can display them all
– Utilizes DualSense (bow etc)https://t.co/AhyGVqlxqv pic.twitter.com/V5jWz1lPNr

The post also revealed that fans who noticed a few Legend of Zelda similarities, they are not wrong. The game was inspired by the Zelda 3D titles which aren’t shocking since Ember Labs is famous for a Majora’s Mask video which has over 10 million views on YouTube.

Kena: Bridge of Spirits hasn’t received an official release date yet. However, the developers revealed that they can expect the game in several months. They also announced that the game will not cost over $60 and that fans can finish the game casually in over a weekend. In addition, the game will not have microtransactions.

Kena: Bridge of Spirits will be available on the PlayStation 4 and PlayStation 5 as well as the PC through the Epic Games Store.