Bravely Default launches next month on the Nintendo Switch, and as the release date comes closer, more information is appearing regarding the world the game takes place in. A new trailer for the game features a previously unannounced region of Excillant, the Snow Country of Rimedahl.

Until now, Bravely Default 2 demo players had only explored the Desert Oasis of Savalon, traversing the city set in the center of a searing desert. Players were only able to try this region and sample a few job classes.

However, the game is set on the continent of Excillant, which is divided into five distinct kingdoms, so there is still a lot more to discover. So far, Bravely Default 2 has managed to maintain most of the features and mechanics that made the original game successful. 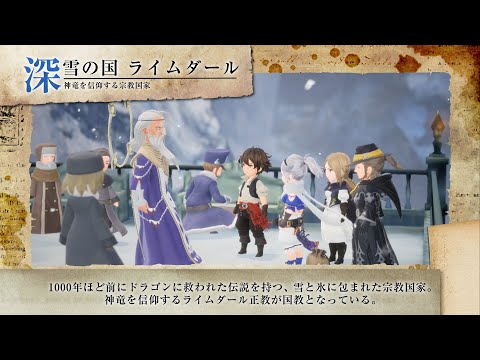 With the new trailer, fans are receiving their first look at the second of the five kingdoms in Excillant – the Snow Country of Rimedahl. It is described as a religious region that idolizes the Dragon God, an entity that saved the Rimedahl Church a millennium ago, and from that event, the Country of Snow was born.

The Dragon God is believed to be sleeping inside the Dragon Cave, though not much else is known. There is also a small town nearby named Enderno. With the world being totally unique, it seems to be a little overlap with past entries in the series, unlike Bravely Second, which was a direct sequel of the first game.

Bravely Default 2’s demo has left mixed reactions from fans, but there is reason to believe that developer Square Enix is responding to critique and is planning to release a game that everyone can enjoy. After revealing Rimedahl, it appears that the game is back on track.