Genshin Impact was first announced last year, and now, the game’s release date is fast approaching. It was initially thought that Genshin Impact was comparable to Breath of the Wild, but now we can see that they are completely different games, except perhaps for the aesthetic.

When you first take a look at the game, it can be confusing. However, we now have a clear understanding of what the game is exactly. Genshin Impact is an action RPG with open-world gameplay. What’s more, players are able to switch between 4 different characters in the middle of the fighting.

Some parts to Genshin Impact’s storyline have been available on the game’s website in the form of manga, but a story trailer was released today and this further explained the game’s story. The teaser talks about how the in-game city of Mondstadt used to be ruled by a tyrant. 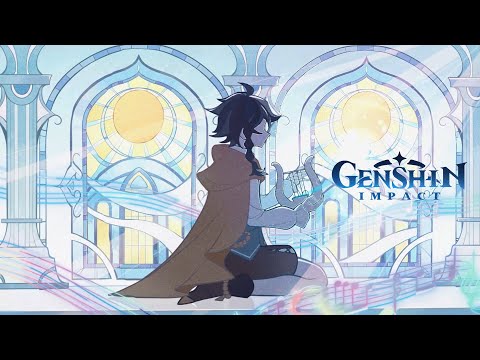 The narrator, whom we assume is the current Archon of wind, tells us the story of how he came across a young bard who led a rebellion against the tyrant. The rebellion was successful and the ruler was defeated.

Some fans have speculated that the backstory is probably that of Venti’s, who is a character known to be quite mysterious. Also, Venti looks pretty similar to the boy in the video. A comment on the teaser even says that Venti is probably a reincarnation of the boy.

To be fair, several betas have already been released for Genshin Impact, so it’s not surprising that fans have been trying to collect lore.

More information regarding the game will definitely be revealed after its release, but this is the clearest backstory we’ve had so far. That being said, we probably won’t get Genshin Impact’s complete story on launch.

This is because the upcoming title is designed to be ongoing, similar to a live service game. On the plus side, this spiritual successor to Honkai Impact will be free-to-play.

Genshin Impact will be available for free starting September 28 on mobile devices as well as on PC and PS4. Meanwhile, a Switch version is currently being developed.