Pokémon has become one of the most well-known franchises in the world since its debut in February 1996. It’s been almost universal, with brands ranging well beyond mainstream games and anime, making it a lucrative and sought-after license.

Pikachu has been in the Macy’s Thanksgiving Day Parade since 2001, and the Detective Pikachu film adaptation made over half a billion dollars in 2019. In terms of audio, many Pokémon albums have been released over the years; several are soundtracks for the games and films. Post Malone held a virtual Pokémon Day concert earlier in 2021 to premiere “Just Wanna Be With You,” one of the musical collaborations scheduled and announced so far for Pokémon’s 25th anniversary. 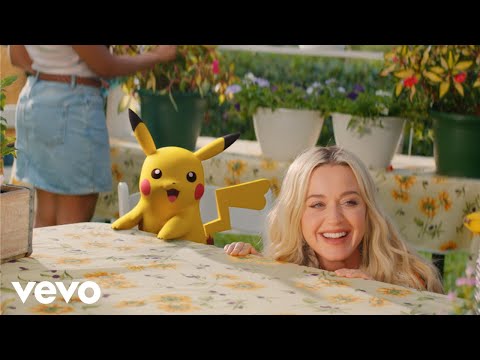 Katy Perry’s YouTube channel has posted the music video for “Electric,” which features the popstar, Pikachu, and Pichu. Pikachu and Perry are seen spying on a younger version of herself and Pichu (Pikachu’s cute devolution) in the film, secretly urging them to follow the music.

Carlos Lopez Estrada directed the film, which was shot in Hawaii. The single has since amassed over a million views in just over 10 hours, indicating that it is a hit. It is still ranked #8 on YouTube’s trending list at the time of release.

To coincide with the release of the record, limited-edition merchandise was also launched. Pikachu and Katy Perry’s names are featured on the merchandise in a special style. T-shirts, hoodies, and totes are all included with the style. The song will appear on Pokémon 25: The Album, which is expected to be released this fall. Throughout the year, more music related to Post Malone’s track will be released. Many that wish to buy a physical copy of “Electric” will do so right now on the website.

Collaborations like this show how dominant and successful the Pokémon franchise has been in the last two decades. Very other games have seen many well-known musicians produce and release music exclusively for the series. J Balvin, a reggaetón musician, is the next established partnership. Following the Pokémon Day reveal of Pokémon Legends: Arceus and Pokémon Brilliant Diamond and Shining Pearl, Pokémon superfans will no doubt be excited to see what more announcements and alliances are on the way.