Spelunky 1 and Spelunky 2 Heading To Nintendo Switch in 2021

Announced only today, Spelunky and Spelunky 2 are both set to release on the Nintendo Switch next year, more specifically during the summer. Considered to be one of the foundational titles in the roguelike genre to which it is a part of, Spelunky is a classic platformer released all the way back in 2008.

Given how the first game was somewhat of a pioneer, this gave developer Mossmouth the chance to learn from its mistakes and turn Spelunky 2 into a more polished and improved game than the first title. In line with this goal, the developer decided to delay Spelunky 2’s release for about one year before officially launching it in September of this year.

That being said, the sequel’s delay was proven to be worth it. Players and critics alike loved Spelunky 2, describing it to be an incredible roguelike that skillfully and seamlessly incorporated all the best elements of the first game. 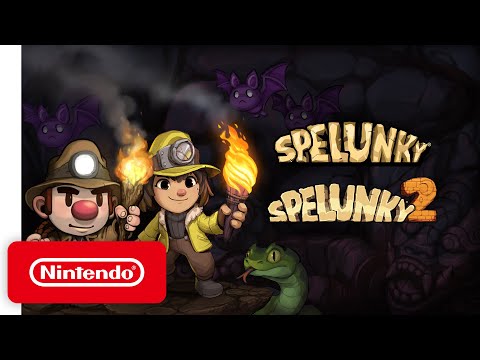 Given what we know about Spelunky 2, it doesn’t come as a surprise that the sequel was adored by many. The game, despite having an adorable and cartoonish art style along with family-friendly graphics, contains difficult levels that shouldn’t be taken lightly. Add its ridiculous and slapstick humor to the mix and we have an instant classic that many have and will enjoy for years to come.

Spelunky 2’s online co-op, which PC players had to experience later than others due to the feature getting delayed, gives fans the wonderful opportunity to enjoy the game with friends and/or family.

Virtually playing with other people in this manner is definitely a feature that is highly valued, especially given the current COVID-19 situation wherein people are requested to stay inside the safety of their homes.

In a recent announcement, specifically during the Nintendo Indie World Showcase livestream, it has been revealed that the two Spelunky titles will be broadening their horizons, allowing even more gamers on a different platform to experience the two games and all they have to offer.

To be more specific, both games are set to launch on the Nintendo Switch. The announcement came with a trailer that showcased everything fans love about the franchise, including the deadly traps, intense platforming gameplay, and so much more.

That being said, it makes a lot of sense to bring popular roguelike games such as these two to Nintendo’s hybrid handheld console. Spelunky and Spelunky 2 have gameplay mechanics and family-friendly elements that fit right in with the rest of the Switch’s library of games.

Besides, this gives Nintendo Switch users the chance to experience Spelunky 2 with their friends, as this particular version supports local and online multiplayer. Meanwhile, the foundational title will only support local, but this doesn’t make it any less fun.

The Nintendo Switch version of both titles have a release window of Summer 2021, so both games will be available on the eShop around that time. However, they each have their respective listings now on the eShop, so both old and new fans can go ahead and add them to their wishlists for now.