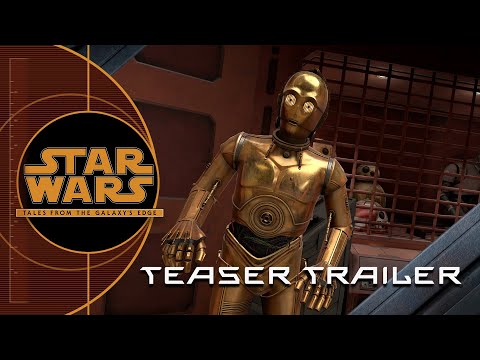 During the Facebook Connect event, Star Wars: Tales from the Galaxy’s Edge showed off a new gameplay trailer as well as revealed a release window.

Previously there were teasers and speculations that the upcoming title would be intertwined with the Black Spire Outpost, which is a place you can visit in real life at the Galaxy’s Edge section of Disney parks.

Now, in this trailer, we can see how you will be blasting your way through the area in the middle of a brand-new Star Wars story. Not only that, but a familiar gold-colored droid also appears to be your unlikely tour guide.

That said, we’re overjoyed to once again be reunited with our beloved droid C-3PO. Although, he’s still as panicky as ever and his metallic hands are only good for bonking R2-D2 on the head, so you will have to be the one to handle the blasters, as well as scan your surroundings and manage your inventory.

That being said, it seems that Tales from the Galaxy’s Edge is a fully-featured shooter, which is a welcomed change from the constant lightsaber action.

Star Wars: Tales from the Galaxy’s Edge will exclusively be available on the Oculus Quest as well as the Oculus Quest 2 sometime during the holiday season. It’s worth noting that Oculus also mentioned that the game will continue to ‘evolve and expand’ even after the title has been released.

So, definitely look forward to more updates or any DLC announcements for the game.